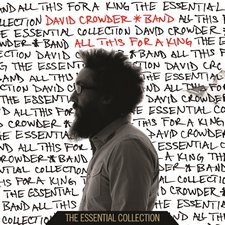 David Crowder*Band
All This For A King: The Essential Collection

It's always a bit melancholy when a longtime artist and fan favorite decides to call it a day, especially when that group is at the peak of their creative powers. Sure, the various members of that group may go on to other projects and surprise you with what they are capable of, but the specific grouping, the lineup that you were most in love with, will be no more. It's one (sad) thing to see an artist you admire struggle and eventually decide to end it, or if that band you have followed is just one remaining original member when they hang up their guitar straps, but an artist going out on top is a rare thing.

Such is the case with David Crowder*Band. After last year's fantastic swan song, Give Us Rest (A Requiem Mass in C [The Happiest of All Keys]), the Texas based fellows decided to go their separate ways after seven albums (A Biblical number that they hinted was significant). Lead singer David Crowder will continue on with his simply named musical collective, Crowder, and other members will continue on as a new musical creation, The Digital Age. No doubt Crowder (the band) will continue to perform the songs that DCB is best known for, but the chemistry of performers will surely be different.

And speaking of those songs, All This For A King: The Essential Collection attempts to collect those that are considered "essential" for the obligatory send off, hits compilation. In defining the "essential" aspect of those songs, the collection gets it mostly correct, with a few glaring problems towards the end of the album and, sadly, no completely new material for fans to sink their teeth into, or for congregations to sing.

In terms of corporate worship, David Crowder*Band has historically straddled the line between easy sing-along anthems for worship gatherings and quirky, left-of-center songs and albums that stretch artistic boundaries for the genre of worship music. While classic albums like 2005's A Collision or (3+4=7) are holistic affairs that stand up as a whole piece of music, individual songs like "Here Is Our King" and "Wholly Yours" stand up as great sing-along worship tunes. All This For A King: The Essential Collection includes most every song that falls into this category. "Everything Glorious" from Remedy and "O Praise Him (All This for a King)" from their sophomore album, Illuminate, represent what fans want in a greatest hits collection.

What dings a few points from this "essential" collection is the short running length (thirteen songs--plus a song from "Crowder"--seems like too few when covering a longtime artist such as David Crowder*Band; a CD can easily fit at least four or five more songs). It's also a confusing and questionable decision to include the remix versions of several classic songs instead of the original versions, for instance, the remix versions of "Shadows" and "No One Like You." DCB has embraced remixes as a part of their creative life, often releasing collections between albums of new material, but the inclusion of remixes here in lieu of original versions sullies the listening experience and running order. The fact that they are tacked on to the end of the album is a clue that there was some thought as to the alienating nature of techno remixes to the average music listener. Sure, they might be kind of fun, but in a farewell collection, they stand out like a sore thumb.

David Crowder*Band is an essential band. No band in worship music was more creative and pushed boundaries of what could be considered worshipful music. For a career, David Crowder*Band earns five stars hands down, and a teary goodbye from fans. For this collection, however, they earn slightly less.