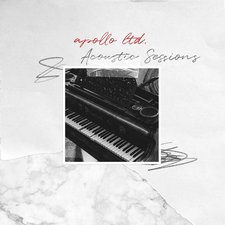 
When one thinks of the "acoustic" sound, I think most listeners picture an artist with an acoustic guitar and mic, who is possibly accompanied by band members with various percussion instruments. For artists as synth-pop driven as the duo Apollo LTD, the idea of something considered "acoustic" from them is certainly intriguing to consider. Less than a month before the release of their anticipated sophomore full-length album, the pair along with Centricity Music are releasing a three-song Acoustic Sessions EP.

The Acoustic Sessions EP opens with a brand new stripped-down recording of one of their most recent singles, "Patient." The full version of the single released back in August and is set to also appear on their new album, Nothing Is Ordinary. Everything Is Beautiful. The studio version of the song is already a softer one for the twosome, but it offers some great lyrics (When my world keeps on shaking and I'm breaking. When the skies won't stop raining and I'm fading, help me to be okay with what I can't change, and remind me there's meaning in the waiting. Help me to be patient) in a slow, catchy pop packaging. Its acoustic take appears to have a new vocal track accompanied by piano and light synths. It's probably an unnecessary new version, but it works. The rest of the EP is possibly already in the diehard fan's catalog. "DNA (Acoustic)" released in September, 2019 as a single and is a simplified version of the track from their June, 2019 freshman album, Out of Body. This version consists of just vocals and piano, dropping the steady beat (and irritating high-voice background vocal), making for a much more intimate presentation. It's a lazy addition to this three-song EP, sure, but nothing is quite as lazy as just tacking on "Heaven (All Around You)," which was directly taken from the aforementioned Out of Body album. While a solid ballad, I'm not quite sure it fits the "Acoustic Sessions" label since it's barely acoustic and not exactly from an acoustic "session." Maybe I'm just nitpicking, but I think I'd have rather seen this as a single release, like "DNA" had been given, or simply a two-song release to package the two acoustic tracks together. "Heaven (All Around You)" is a good song, but it doesn't really belong here.

I've really been enjoying Apollo LTD's work as of late, especially the material they released in 2020. After being treated to a sneak peek of Nothing Is Ordinary. Everything Is Beautiful., I can say it's a worthy sophomore release and a solid project, which makes this EP all that more puzzling of a release. I'd love to see a proper acoustic EP from the guys - even if it's just their voices, an acoustic guitar and/or piano, and some basic percussion. This three-song compilation is hardly that--and quite misleading in its titling--and while it's still worth listening to if you have never heard any of these recordings, for anyone familiar with their releases, this just seems like an uninspired way of turning a single release of their acoustic "Patient" rendition into a mini EP package.