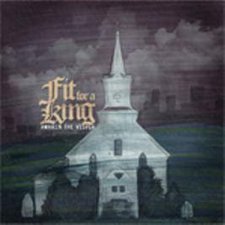 Fit For A King
Awaken The Vesper EP

With so many metal musicians constantly releasing their own new material just about every week, it seems as though good creativity in the metal genre is about slim to none. And even though there is nothing ground-breaking here on this independent EP, Fit for a King has definitely proven here that they are a force to be reckoned with.

This three-track EP starts out with "Towers of Babylon," which displays surprisingly well-composed guitar riffs and powerful growls and screams that will certainly capture the listener's attention. However, what I was mostly surprised by was the sudden clean vocals that popped up in the middle of the song. This is an excellent song to start out with and to come from such an unknown band at this time, but the amazement doesn't stop there.

The following title track, "Awaken the Vesper," is a song that is even better than the previous. This one shows more incredibly done hard-hitting guitar riffs, drum playing, unclean vocals (no clean vocals on this track), as well as some piano parts that have a good touch to it.

Then we have the final and longest track on here and it is called "Blood of the Saints." This song is probably my favorite of the EP; the guitars are better worked than the other two songs, the drums are very distinctly done, and both clean and unclean vocals on here are touching and nothing short of amazing. This song is very well put together and is definitely the highlight of this EP.

The only negative aspects on here is the track list length (only three tracks that clock in at just a little over 10 minutes) and the production quality (that kind of takes away the ability for these songs to sound more distinct than they do). But even with either of those aspects, this EP shows that even with all these different metal albums already released today, the metal genre hasn't run out of surprises just yet, and Fit for a King have definitely proven that here.

It is a shame though that this EP is very underrated as opposed to FFAK's follow-up albums, Descendants and Creation/Destruction, which both have shown how much they evolved since this EP and that they have certainly now made a name for themselves. But even so, for any FFAK fan that wants to check out some their earlier stuff, or just any metal fan for that matter, I think that Awaken The Vesper is something that they will enjoy and would want to listen to many times over.