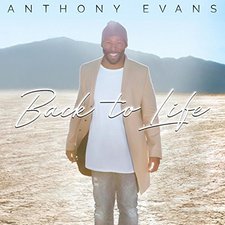 Anthony Evans
Back to Life


Anthony Evans made a big splash with his last album, 2014's Real Life/Real Worship, following a stint on NBC's The Voice. With a newfound national audience, the album debuted on the Billboard 200--a first for Evans after a decade of releasing music. The team behind that success returns for 2017's Back to Life, a worship album that capitalizes on the strengths of its breakthrough predecessor.

Evans made the surprising decision to have then-22-year-old Max Stark produce Real Life, and Stark is even better now. His approach is tightened and modernized, utilizing spliced samples and trap drums akin to the production of Zedd, the Chainsmokers, and the work of Skrillex and Poo Bear on Justin Bieber's Purpose. Opening tracks "See You Again" and "Believe" are perfect examples: two songs that could fool you into thinking they were mainstream pop. As a vocalist, Evans brings an R&B texture, such that even a cover of Bethel Worship's "Ever Be" sounds like today's rhythm-and-blues, especially with the clever musical changes made to its chorus.

Evans sounds, in equal turns, like Trey Songz, Bruno Mars, and his own beast. Vocal acrobatics and heavenly high notes abound, which would be exhausting if it weren't so much fun. There's only one song ("God of Breakthroughs") where Evans dials it down. No matter how impressive he is, though, it only works by the strength of these songs. Evans has writing credits on half the tracks, yet it all comes together really well because of the tight-knit group Evans works with. For example, the album includes songs by mother and daughter Martha and Danielle Munizzi, then Evans has co-writes with them too. There's a sense that he loves working with his friends and doesn't mind stepping back just to sing.

The lyrics aren't atypical of modern worship--there's an overload of "Your love is [blank]" statements--except on the title track. The bridge of "Back to Life" is the album's standout moment, where Evans sings, "Resentment / Depression / All anxiety / They have no power over me." For those of us who struggle with these and feel the power they can have over us, these lyrics might not be easily sung along to. We might ask whether this is theologically accurate while we're still here in our mortal, sinful states. Yet, these are good questions to ask while knowing someday, in Christ, all resentment, depression, and anxiety truly will be taken away.

The penultimate track, "Everything Changes," is this album's biggest sugar rush, but it's far too short: 90 plus seconds shorter than every other song. It then segues awkwardly into the closer, "Your Way," which sidesteps R&B for a straightforward pop ballad that would have been more stylistically fitting for Colton Dixon, another powerhouse CCM vocalist. Thankfully, the bonus track, "Because of Your Prayers (Grandma's Song)," swoops in and ends the album with a sweet-natured ode to answered prayers, nodding back to the style of Evans' 2004 debut.

On a personal note, I saw Anthony Evans years ago when he led worship at my church. He did a perfectly fine job, but it didn't prompt me to dig into his discography. This album has changed that; I even love everything I've heard from his older recordings. Evans might be one of the greatest vocalists working in Christian music today. The melodies he masterfully coos and croons had me -- no joke -- giggling during my first listen of this album. If the chorus of "Home" drops and you aren't having a dance party, then I'm just not sure what to say.