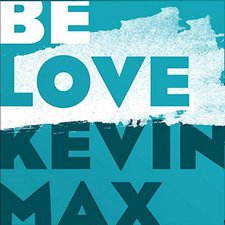 
Kevin Max has a seeming endless supply of creative output, with a no-boxes approach to re-invention and genre. He returns with this stand-alone single, Be Love, in partnership with the upcoming book by Dan White Jr. called Love Over Fear, releasing May 7th. (For more info on the book and White himself check out the soon to be launched loveoverfearproject.com.)

Max has a great handle on who he is as an artist, allowing his influences to inform his music, without ever fully ripping any of them off directly. This is a delicate balance that many musicians struggle with, but he has managed it with seeming ease over the course of his solo career. Be Love carries with it a very Bowie, Lennon, late Beatles sound. It hardly seems possible, but in addition to 80s new wave, straight ahead rock, gospel flavored hymns, jazz, blues, cover songs, indie rock, and pop; he can now add this 60s/70s musical era to the ever-increasing list of genres he pulls off perfectly. The song was written by Kevin in one day at his home studio, then self-produced by Max in the studio of his friend and co-producer Andrew Capra. In addition, the production manages to sound both contemporary and as if it could have been released fifty years ago, no small feat.

This reviewer hears echoes of his first solo offering, Stereotype Be, as well, which is one you should definitely check out--or revisit--if you dig this song. An acoustic guitar strum (sounding very Radiohead The Bends-like) kicks the song off, and if you listen closely you can hear the phrase, Im just watching the birds low in the mix, as a wailing lead guitar joins the fray. Max then states the thesis of the song right out of the gate with the line, Be love/put a smile on someones face/its easy when you do it/so much easier than hate/be love/when you want to stir it up/its better to spread sunshine/than to wallow in the mud. A buoyant Lennon-esque piano line and light horn section further add to the instrumentation, to produce a deeply layered musical landscape. Of course, it wouldnt be a Kevin Max song without his distinctly crisp vocals, and he delivers another fantastic performance. Slightly scaling back the vibrato (though its still present) in favor of self-harmony, he sounds as flawless as ever. Another lyrical highlight is the line, Build a bridge over a wallcause were all human beings/just trying to figure this all out/standing here/watching the birds fly above us all/so above it all.

All in all, a call to love is a familiar sentiment, but an increasingly needed one in an age of interactions hidden behind screens rather than in person. Be Love is another fine entry in an ever-expanding body of work by veteran Kevin Max, and one worthy of your attention. Check it out wherever digital music is sold, and support independent musicians!