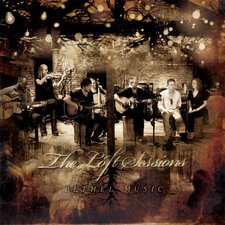 Bethel Music's latest album The Loft Sessions creates an interesting dynamic. While most churches would create a live or a studio album, Bethel has released an album that seems to encompass both of these elements and something more. Listening to The Loft Sessions, it is as if the Bethel team have decided to hold their own private worship session. And in this brilliantly crafted yet still raw collection of songs, it feels as if you are joining their intimate gathering.

"One Thing Remains" is the single track on The Loft Sessions that is also found on Bethel's debut Be Lifted High. The familiarity of this song ushers in a worship environment with the hook "Your love never fails, and gives up, and never runs out on me." Its inclusion could make The Loft Sessions a replica of the debut. However, by beginning the song with a piano based melody and folky overtones, it is more organic and becomes easier to focus on the lyrics. The additions of the organ and superb harmonies make this version of "One Thing Remains" outstanding.

The following track, "My Dear," is a standout on this release. The organ-driven melody and memorable vocals add a unique dimension to what could have otherwise been a slow, droning song due to lyrical repetition. The lyrics within the song itself are beautiful and raw, especially when Hunter Thompson sings "I love you my dear." It is within this lyrical and musical collaboration that you realize Bethel Music have released something quite extraordinary, an album which is more than a manufactured money making project but rather a love letter to the listener from God.

While The Loft Sessions is unique due to the intimate vibe found throughout the album, the songs led by Brian Johnson and Jeremy Riddle sound very similar to that on Phil Wickham's Singalong. Nevertheless, the powerful vocals of the Bethel team combined with a choir and instruments like the organ still make each song enjoyable in its own right. "Angels" and "Fall Afresh" are both repeated on the album with extra acoustic versions attached to the end of The Loft Sessions. The inclusion of two other new songs would have made the release more credible, especially as the addition of "One Thing Remains" means there are only nine new tracks on the album. However, the acoustic versions are still enjoyable largely due to the poetic lyrics within them.

Slower and more acoustic than their debut, the musicality and restraint Bethel displays in stripping back the smoke and mirrors is what makes The Loft Sessions a phenomenal release. The songs themselves remain lyrically and musically at the extraordinary standard we have come to expect from Bethel Church and the associated Jesus Culture. Ultimately each track of this striking album draws the listener deeper into the presence of God and leaves them wanting more of Bethel music, and of Jesus.