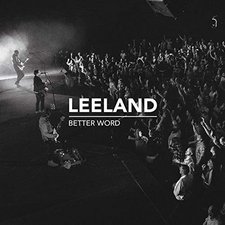 
Texas-based worship band Leeland has been a staple of innovation in Christian pop-rock since debuting in 2005 with the excellent Sound of Melodies. The band's last album suffered due to an entire lineup shift (save for frontman Leeland Mooring), as well as from having signed with Bethel Music. Thankfully, Leeland is now free from the latter yolk, and the band is now able to shine again, as made apparent on their latest (live) album, Better Word.

Listeners will need to prepare for a long journey, as Better Word clocks in at over an hour-and-a-half. Live worship albums often have the tendency to run on excessively, and while Better Word pushes the limit, it compensates by effectively conveying the excitement of the live show. While similar projects usually feel contrived and forced, the atmosphere of genuine worship is present here, bleeding through Mooring's sincere and passionate voice.

The album kicks off with "Inhabit," a solid offering which sets the bar at a perfectly precise level, where listeners are treated with a strong start which is still easily surpassed later. Surprisingly, the best piece on the album is the colossal "Way Maker," one of the few worship songs to organically surpass eight minutes in length. Boasting an excellent melody and simple, powerful lyrics ("You are: way maker, miracle worker, promise keeper, light in the darkness / my God, that is who You are"), "Way Maker" is easily one of Leeland's best songs. Another highlight is "Rain," which features British gospel artist Noel Robinson. Robinson's soulful vocals add a smooth degree of texture to the album and pairs well with Mooring's voice.

Also worthy of note are "Where You Are" and "First Love Fire." The latter track feels like "Leeland" at its core, which will likely be refreshing for fans who are less drawn to the live worship genre. It contains great lyrics ("I remember when all I knew to do was sing Your name / I remember when all I longed to do was give You praise / Jesus, light the first love fire in me / I wanna fall in love with You again") and a memorable and catchy melody. The closing track, "Lead the Way," fails to make a strong impact, which is a necessity when dealing with such a long album.

It would have been excellent to hear live worship renditions of a few of Leeland's older masterpieces. Doing so would have helped tie together the band's discography, as well as showcase Mooring's exceptional versatility. Live worship albums are seldom subjected to adequate criticism, leading to many lackluster projects saturating an already overcrowded market. Thankfully, Better Word escapes many of the genre's pitfalls, leaving listeners with an elevating and memorable work of art.