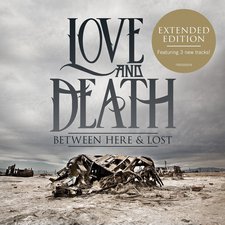 Love and Death
Between Here and Lost: Expanded Edition

In January 2013, Love & Death released the regular version of their debut full-length album, Between Here and Lost. The new "expanded edition" features three additional tracks. (This review will focus solely on the additional content. View the full album review here).

The three new tracks feature a new song called "Empty" and two remixes of songs present on the original release; the Rauch Remix of both "The Abandoning" and "Meltdown." With "Empty," you get a song that would have blended perfectly into the original release. Overall, the tune is another solid mix of chunky guitars, melodious vocals and darker screams. "The Abandoning (Rauch Remix)" is honestly a waste of time. Much of the song feels exactly like the original, only the remix takes all of the edge out of the intro and instead adds processed music (keys and strings) to the mix. There really just isn't enough variance here to make it memorable. While some sections have a good sound, the original far surpasses this remix. "Meltdown (Rauch Remix)" is a different story. While the same vocal track is used, the rest of the song sounds completely new and different. Everything from the original recording is completely stripped out and replaced by a very soft piano. Though it's the same vocal recording (aside from some added background vocals), the volume is turned way down to blend with a newer and softer background. The biggest complaint, however, is that some of the vocals sound too harsh to seamlessly fit the music, but all-in-all, this is probably the most enjoyable of the extra content.

If you already own the regular version of this stellar album, your best bet is to download the additional tracks only -- especially "Empty" and "Meltdown (Rauch Remix)." If you've been meaning to, but just haven't gotten this gem yet, you can't really go wrong in purchasing this version (it's even cheaper than the original from some retailers). It would've been nice to see Head and company do a little more with this expanded edition. As it stands, there are a couple of worthwhile extras, but as a whole it's disappointing. I think most fans were hoping for something huge and instead got very little.