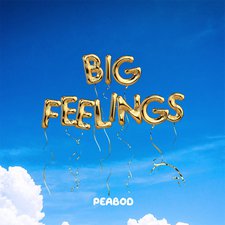 
It's been a big year for Centricity Music's happy-hip-hop artist PEABOD since the release of his Backpack EP a year ago this month. He's been featured on some high profile tours, tied the knot with his longtime girlfriend, and started his own social media-based talk show during the coronavirus quarantine. But now Isaac Peabody is ready and poised to release new music, starting with the first single of the year, "Big Feelings."

From the start, there's a darker tone to the track, with an edgier beat and mood set. But there's still a playful twist to the sound; angst isn't really PEABOD's persona, so when his topics turn serious, there's still a feeling of hope when he gets real. Musically, the track has the pop sensibility of something from TobyMac or John Reuben--two artists who have long mixed the more serious and playful in their own signature sounds. "Big Feelings," at a quick glance, sounds eerily timely, thematically. As he raps about his views shifting and not being sure how to handle "all these big feelings," one might think he's referring to the current social chaos in our country. However, Isaac has revealed that the song was penned at the beginning of the year, born out of overcoming a struggle with bitterness. It's a relevant struggle many of us can relate to, and Peabody has said it's a story that will become more clear with songs that will follow.

Guest spots are something PEABOD fans have come to expect--from the likes of Unspoken's Chad Mattson, to Gotee Records' Hollyn--and this time around, rapper Aklesso makes an appearance for a pivotal verse. His contribution feels even more specifically tailored to the world's current state as he references not going outside and the world being on fire. He wraps up the emotional wrestling match with a reminder to "look to the One who's Heaven sent." Once PEABOD returns to the mic, he follows Aklesso up with a frustrated lament about how his music has been received, "The welcome was chilly and now I feel silly, They said I'm too giddy, songs are too kiddy. Now I feel dizzy, trying to leave swiftly, but traffic's so busy, I'm stuck in this city. I guess they don't get me. I guess they're real picky. But God don't let my faith in people get too flimsy. The world was so pretty, but now I feel gritty. So God come quickly, cuz I... took a suckerpunch that sent me reelin', now I'm dealing with all these big feelings."

Singles are still a tough thing to critique because it can feel like we're reviewing just one chapter of a book or one act of a movie. But by itself, "Big Feelings" -- whether about PEABOD's musical journey or our own personal struggle with how to process the messy state we're in -- is one of those fun-yet-meaty songs that's catchy but, at the end of the day, will still get you thinking--and keeping your focus on Christ.