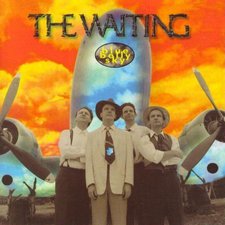 
The Waiting was a Georgia-based pop/rock band with poetic lyricism, perfect for the introspective listener. They were a quartet including brothers Brad and Todd Olsen on vocals and guitars, with Chris Leake and Brandon Thompson holding down the rhythm section. Their active years fell primarily in the 90s with three excellent label-backed albums released in 1995, 1997, and 1999 respectively. Blue Belly Sky was released in its original eleven-track length in 1995 and re-released with additional songs in 1998. This review will focus on the original album release with the original artwork and track list.

Opener "Look at Me" is the overall gem of the track list, marrying some of the most clever turns of phrases with an incredibly catchy guitar line. A great example is the evocative opening lines full of quirky imagery stating, "Golden bars of sunlight come sneaking through the shutters/Laying stripes on my back, like a zebra/Sweaty fingers turning pages, and clinging to the bed/Like it's a bride and I never want to leave her/Paul calls me a saint and the mattress shakes with laughter/And the sheets let out a chuckle while the pillow holds one in." It's a prime case of rarely matched cleverness and whimsy regardless of genre or era.

"Truly Amazing," "Israel," "Mercy Seat" and Staring at a Bird" continue the string of highlights kicking off the album. Following closely on the foundation laid by "Look at Me," "Truly Amazing" has a bright guitar chime as the listener is reminded of the glory of God seen in creation all around us. "Israel" drives and soars, while "Mercy Seat" simmers with an acoustic guitar lead, and "Staring at a Bird" echoes mainstream band The Wallflowers, expertly pulling off the 90s alt/rock vibe.

Another noteworthy track is the propulsory "The Air I Breathe," which features a thumping bass line and raucous drums for a slightly frantic and fuzzy sound. All in all, it's an absolute smash side one to a terrific record. Lastly of note are the meditations found on "Your Face," and the tender worshipful note that "Is This the Day" wraps things up with. The lyrics of "Your Face" opine and remind us of the benefit of regular intimacy with Christ movingly saying, "I'll come to you in the morning/before the heaviness of day devours/the stillness of dawn." How true and needed this reminder is for the harried modern soul.

The first five songs are legitimately perfect, and the entire album is smart and arresting lyrically, while maintaining a high level of accessibility. Notably, the re-release from 1998 is the only version available to stream with four additional songs that are all of quality, but ultimately detract from the album rather than adding anything necessary. Again, they're good songs (especially "Still So Pretty"), but they just aren't needed on an already sparklingly great album. Overall, The Waiting is a gem of the 90s Christian pop/rock variety, and Blue Belly Sky is a must for any fan of the era.