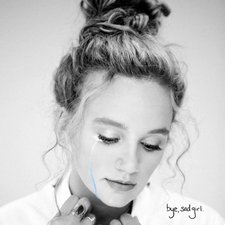 
Breaking up is hard to do, and Gotee Records artist Hollyn walks us through the highs and lows of earthly relationships on her newest release EP, bye, sad girl. Since bursting onto the scene with her self-titled EP as an eighteen-year-old, she has since released a full-length album and a bevy of songs, one or two tracks at a time. This old, and now modern day approach to releasing music can be effective in keeping your name at the forefront of listeners' consciousness, and seems to have served her career well to this point.

With bye, sad girl., Hollyn returns with an emotionally raw, crisply produced, and deeply personal album based around the theme of sadness, with this melancholy state brought on by a dating relationship gone bad. Lead song i feel bad for you is easily the most catchy and instantly accessible among the set, acting as a perfect beginning statement. Its sentiment is dismissive without being unkind, and declarative that she has recognized the relationship as toxic, and wont be answering his calls. Kids these days would call it a bop, and it certainly is with its buoyant chorus that trips along as she states, 'Cause I'm off the ground, higher up than I was when you were/Holdin' onto me, holdin' onto me. The following two songs, i dont know if we can be friends and isnt it harmless?, are produced and co-written by frequent NF collaborator Tommee Profit, with vocalist Fleure also getting a co-write and guest vocal on the latter. Musically, each song is placed on a bed of familiar trap beats with isn't it harmless? being the most interesting to this listener's ear. At first, it would appear to be an innocuous and repetitive song, but further listens reveal the somewhat hypnotic repetition to be purposeful. Verse one gives us the clearest picture of a souring relationship that seems to have lulled her to a metaphorical sleep, as she listlessly begins singing, Back to the place, I go back to the place/Where you told me you loved me/Said I was queen of your world, yeah/I thought we were somethin', somethin'/You gave me shelter/You gave me room for my imagination/You expect me to believe it was all an illusion/It's you, you're confusin'.

After calling for peace, and a little sleep in the poppy i think we should break up, Hollyn wisely strips things back, and slows things down with i miss u - (interlude). Within, we find her second guessing her decision to break it off, vacillating as she says, I did the right thing/Please tell me how I did the right thing/What if I let go too soon? Finally, she concludes the tracklist with the acoustic guitar-led i wasnt enough for you. Here, she sounds much like fellow songstress Tori Kelly, and it's a fitting closer to a short but effective set of songs.

Also worth mentioning is that each of the six songs on the EP has an accompanying illustrated music video that pulls the album cover art, lyrical theme, and color scheme together. The featured color is blue, though instead of the on-the-nose use for the color to mean simply sad, she also uses the biblical meaning of the word; the healing of God. It's a nuanced layer that would be easy to miss without digging a little deeper, and it makes this EP stand out among the pop releases from this year.

What Hollyn has accomplished with this album is giving listeners a snapshot of a low point in her life, and she does so without wallowing in self-pity or bashing her former love. Kudos to Hollyn and team for reaching beyond common Christian music tropes to include other topics experienced in Christian life. This reviewer, for one, is pleasantly surprised, and pulling for more of the same from both Hollyn and others as we approach the sixth decade of modern Christian music. With bye, sad girl., Hollyn has released her most thematically cohesive and sonically diverse album yet. This is one to check out for fans of well-made pop music.