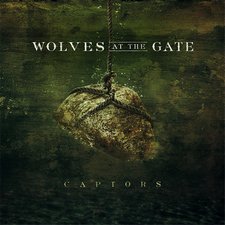 Wolves At The Gate
Captors

Less than 9 months after their first EP was released on Solid State Records, Wolves at the Gate delivers a very solid sophomore release. For those who are new to this band, they provide a sound that's quite different than the typical hardcore bands because they present a very good balance of screaming vocals (harsh) and clean vocals. Brace your mind and ears for an incredible journey with Wolves at the Gate's Captors.

The album starts off with a suitable opener that is accompanied with keyboards, "The Harvest." One unique thing about Captors is that it has strong passionate Christian lyrical content. However, it's more noticeable when one simply tries to focus on the words spoken, as it's easy to get caught up in all of the musical composition of guitars, drums, and bass. One example is "Awaken," "How can I question your might / when even angels bow down to youWhen men cast their doubt upon your name / You are unchanging / still the immutable God." The choruses are well thought out and never seem to become repetitive or predictable.

Captors contains a very unforgettable song that illustrates the life of a prodigal son in "Dead Man," "I was once a dead man / a stranger with no hope / I stood opposed to God himself / and yet he pardoned me." Starting off with some acoustic riffs, "Slaves" is easily the highlight of the album, as it has a very dark and serious tone that reflects on the matter of getting away from the pressure and not becoming a slave to man anymore. "Step Out to the Water" is the perfect follow-up to this song; it's just as impressive and has a really cool introduction that evolves into an engaging sound. The album winds things down and offers some emotionally moving songs like "Man of Sorrows" and "Safeguards," the latter of which reveals how forgiving God can be despite what we do or have done, "How can I / Repay You / Lord for This all-forgiving love? / For it's the sight of Christ upon the tree / that surely / will always still / and humble me."

Wolves at the Gate has evolved a lot from the last album, We are the Ones. Some of the improvements include smoother choruses, very memorable rhythms or standout moments, and songs that stand alone and can differentiate from one another, which is something that many hardcore bands struggle with these days (Wolves at the Gate does well to avoid the recurrence in their songs, especially with the release of Captors). In my review of We are the Ones, I had stated that I anticipated that Wolves at the Gate's next release would be even better, however, I didn't expect their next release to be this extraordinary. Hardcore and metal music listeners, take note; releases like this one are a rarity and I think this release (as remarkable as it is) is still the beginning of Wolves' potential. Wolves at the Gate deserve a lot of credit for their efforts on this project, as the listening experience remains enjoyable from beginning to end.