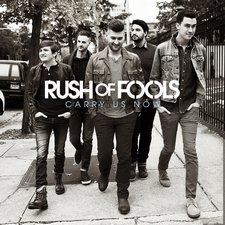 Rush of Fools
Carry Us Now

Rush of Fools has returned to the music scene with their fourth studio album, Carry Us Now. Moving more in the direction of a worship project than previous releases, the album pulls most of its lyrics from hymnodic sources and concepts.

The album opens with "Take Me Over," a laid back song which is primarily sourced from works such as Peace like a River. Although one of the stronger tracks on the album, it doesn't particularly stand out, which is disappointing. The album moves in a slower pace with "Held in Your Hands," reminiscent of the band's earlier works. Unfortunately, it also fails to live up to what was previously defined in years past. "Power in the Blood" is a strong comeback, however, featured halfway through the album's track list. It bears the influence of bands such as Rend Collective. The upbeat redux of the well-known gospel hymn is both catchy and passionate, enabling it to stand alone as a radio single. "My Heart Cries Out" and "In All Things" are similar in that they come across as run-of-the-mill worship songs. Both are easily forgettable and feel melodically and lyrically forced ("who is like our God, in all things You are good  Jesus, who can compare to You?"), with average-quality clichéd lines simply being repeated over and over again.

Thankfully, Carry Us Now picks up as it nears the finish line. "God of My Salvation," a slower song, is more in tune with Rush of Fools' self-titled debut album. It feels as though it was passionately crafted, and although simple in nature, it has that magical "something special," characterizing it as a stand-out song.

The album closes with an acoustic version of "Undo," their signature song, making its first appearance since Rush of Fools' 2007 self-titled debut. Initially showing up as the first track on the first album, one is left to wonder if this song, now placed as the last track, represents a bookend signifying the end of a chapter. Regardless, it is an exceptional piece and a great way to close out the album.

In addition to the album's awkwardly paced high-low tempo, the greatest weakness is found within its generic sound and melodic structures. As with so many CCM artists today, their music has been forced under a blanket of uniformity. Judging by Rush of Fools' earlier releases, the band is talented enough to exceed Carry Us Now's quality. In short, the album is average at best, but the band is better than that.

If you're seeking a light and easy-going worship album, you'll most likely enjoy Carry Us Now. The album isn't bad, nor is it poorly created, but almost every song on this album carries a "been there, done that" vibe. If Rush of Fools hopes to continue on, they'll need to expand and grow their sound with more original work.

After a couple of acoustic pop/contemporary albums to start their career, Rush of Fools ventured into pop/rock territory for 2011's enjoyable release, We Once Were. While it wasn't of "album of the year" quality, it appeared to be a solid step in the right direction. Instead of growing and moving forward, three years later, we see Rush of Fools releasing an album much more in line with their first two. Carry Us Now features a strong dose of contemporary music with a little pop and folk influence mixed in. The rockier edge from their third LP is completely gone. Musically, the record is more developed and interesting than Rush of Fools or Wonder of the World, but lyrically, the art has regressed. While We Once Were was far from a lyrical titan, it seems like the lyrics for Carry Us Now are too similar to many popular worship songs. While the actual lyrics feel copied, the song titles themselves are even more painful. The track listing reads like a popular list of Christian clichés. Don't get me wrong; these things are beautiful and meaningful in and of themselves, but it shows a lack of creativity on the band's part. After three years, it would've been nice to see Rush of Fools grow and improve on the sound they started with We Once Were, but instead, the group has moved away from that sound altogether, opting for one more similar to their earlier works. Carry Us Now will undoubtedly be loved by many fans of CCM and Christian radio, but instead of seeking creativity, Rush of Fools have offered up more of what's already there. Carry Us Now may have a couple of bright moments, but as a whole, it's just average. - Review date: 5/30/14, Michael Weaver