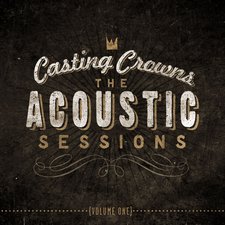 With over eight million records sold and dozens of Grammy and Dove Awards to their name, Casting Crowns is convincingly a quintessential "successful band" in the Christian music industry. Despite any mixed critical opinions, they work hard to push out material to their massive fanbase on a regular basis, filling in the gaps between studio releases with live albums and Christmas projects. So what else is there left to do in their prolific career? An acoustic album, of course, and that's where The Acoustic Sessions: Volume One comes into the picture. The good news is that it works better than one might initially assume.

Save for two new tracks, The Acoustic Sessions consists wholly of trademark Casting Crowns songs: four tracks from their self-titled debut, two from Lifesong, and two from The Altar and the Door. While selections from Until the Whole World Hears and their latest effort Come to the Well aren't included here (likely to be left for a hypothetical Volume Two down the road), Casting Crowns has more than enough material to make a release like The Acoustic Sessions worth the while. Not every track is an improvement upon its original, but there are a few highlights worth mentioning. "If We Are the Body" and "East and West" both take great shape as acoustic pieces, and Mark Hall's vocals end up carrying the emotional weight of each track in a way that the original versions did not. Similarly, "Who Am I" sees Megan Garrett take on lead vocal duties, and she breathes quite a bit of new life into the dated AC radio favorite with simple acoustic guitars in the background. The two new tracks, "Delivered" and "Only You Can Satisfy," are hit and miss, but both feel purely written for an acoustic treatment. "Delivered," again featuring Garrett on lead vocals, provides a great balance with the folk sensibilities the song employs. "Only You Can Satisfy," however, runs long like a drawn-out b-side that never really gets started.

It is tough, however, to critique these songs completely fairly when the tired lyrics still remain. For a case study, "American Dream," regardless of its acoustic base, still suffers quite a bit from its lyrical approach. While the message of the song, how to work hard to provide for a family without neglecting more important responsibilities, is certainly admirable, Casting Crowns doesn't ever help their case with their almost disdainful delivery, and unintentionally cheesy lines don't help matters either ("'All work, no play' may have made Jack a dull boy/but 'all work, no God' has left Jack with a lost soul"). While tracks like these are meant to be convicting (and to many listeners they are rightly so), they seem just a little too condescending to enjoy as they are. With these sorts of problems still front and center on the project, the acoustic renditions only go so far to help the songs along in the freshness and interest. Perhaps more new tracks with fresh songwriting would have helped the project as a whole instead of trying to resurrect already-lacking material.

Casting Crowns has never been a band to grow artistically throughout their career; once they found one style that appealed to their audiences, they stuck with what worked for every album since. But this fact is why The Acoustic Sessions: Volume One stands out from their catalog: it shows Mark Hall and friends trying new things and stretching themselves creatively. Even if the songwriting itself hasn't improved (and to be sure, the lighter instrumentation doesn't fix the hackneyed lyrical choices throughout), the lighter side of Casting Crowns is a pleasant change from their norm. The Acoustic Sessions: Volume One is by no means a masterpiece, but at this rate, listeners should gladly welcome Volume Two when it comes around.