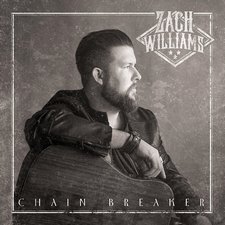 
Zach Williams is a man with a large voice, a deep-seeded sense of classic American songwriting (particularly of the Southern kind), and a testimony to share with anyone who'll listen. With a simple, homespun delivery and a blue collar sensibility, Williams is a welcome new voice in an industry (both sacred and secular) that can, too often, swing towards the plastic and disposable. With a soulful bellow in the realm of that other southern Zach (Brown that is), or fellow Christian Southern rocker Rhett Walker, William's voice carries the day, and his meat and potatoes, countrified rock and soul is a great pallet cleanser for much of the artificial stuff that comes down the pike each day.

A veteran of the southern rock scene, with his general market band, Zach Williams and the Reformation (who were a huge draw in Europe over the past ten years, and who put out two fine southern rock albums), Williams experienced a spiritual awakening in recent years (after experimenting with everything that the rock and roll lifestyle had to offer), and became a worship minister at a church in his native Arkansas. This background is important to note, because every song on Chain Breaker serves as a soulful witness to God's redemptive power and work in a life handed over to Him. The personal and heartfelt nature of this album makes it stand out from other works that might share the same subject matter, but don't come close to matching Williams' songwriting maturity and passion.

The current radio hit and title track kick off the album with an old school grandeur that fuses the classic gospel song structure to a timely song about addiction (if the music video for the song is any clue), and overcoming the weight of sin. A song like this is destined to become an anthem for various addiction fighting groups (Narcotics Anonymous, AA, etc) and is a worthy theme song for anyone caught in an entanglement and seeking a way out. In addressing such a timely subject (many Sociologists, political figures and journalists count the U.S.'s opioid addiction crisis as one of the country's direst problems) with such an open-hearted song (though it's about so much more than just that), Williams has penned a timely song that has clearly resonated with many listeners.

Williams doubles down on the Gospel Music imagery with the rousing second song, "Old Church Choir," a tune with a pop song structure, but joyful nature. As Williams has shown he can do well, he takes this pop form (which can be cloying and overly saccharine at times) and imbues it with an energy that raises the song up in quality.

"To The Table" is the soulful heart of the album, with only Williams' voice, an acoustic and slide guitar and a harmony vocal in the mix. Against this simple backdrop, Williams sings, "All your sin / your sorrow / and your sadness / bring it all to the table / there's nothing He's not seen before / all you sinners / all you saints / bring it all to the table." "My Liberty" has a great opening bass riff that gives a joyful pulse to a song of praise, and the closing, bluesy "So Good To Me," ends the album in fine fashion, with a soulful violin accenting a simple song of thanks.

An album like Chain Breaker isn't a winner due to its stark originality (it sticks pretty close to the Southern rock and soul playbook), but because of the soul and grit of the delivery, and its use of a familiar form to deliver an honest album of hope. Chain Breaker is a very good slice of Southern rock n' roll and Americana, done by a man who has seen it all, and wants to report back that hope is possible, if we "bring it all to the table."