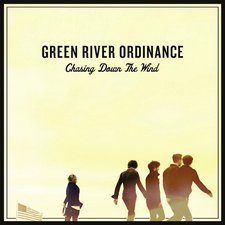 In the early days of rock n' roll, it was customary and expected that a band or artist would release multiple albums per year, tour year-round and appear on television and in movies at the same time. The Beatles, Bob Dylan, The Rolling Stones, Elvis and others of this era released more new music in one year than some modern bands put out in ten. This break-neck pace no doubt contributed to the high burnout and mortality rate of many of the legends of rock n' roll, but the music of that era still sounds great. Sometimes, if an artist or band takes too long to write new music, the resulting album sounds over-cooked and over-thought. There is something about writing in a constant stream of motion that seems to capture the best stuff.

Independent Texas rockers Green River Ordinance have released (according to their Wikipedia page) eight collections of music (two albums and six shorter EP's) in the last four years, and the argument could be made that they are striking while the iron is hot.

The band's latest EP (defined as a musical recording that contains more music than a single, but is too short to qualify as a full studio album), Chasing Down The Wind, does exactly what an EP should, and that is to explore an aspect of an artist's sound in a way that is interesting over the course of a few songs, but would be wearisome if stretched out to more than ten songs. In this case, the aspect of that sound would be defined as "country," though the definition of that genre of music has always been a bit murky. Chasing Down The Wind sounds like honest country music, the kind that ranchers and farmers down south would listen to fifty years ago, and not the commercial stuff that populates the radio nowadays.

Opener "Cannery River" hits all the marks for a great, soulful county waltz; the Civil War era fiddles, the geographical reference, the romantic lyrics about walking by the water with the one you love. Lead singer Josh Jenkins comes by his Texas twang honestly, and the more paced nature of this tune milks every slow syllable and acoustic guitar strum.

The following tune, "It Ain't Love," speeds up the tempo a bit, and makes good use of the mandolin and banjo to set the tone. In a neat switch of the traditional bar room song, the lyrics paint a picture of the things that people who populate bar rooms are really looking for: the deeper need behind drunkenness and one-night stands. "Any old fool can dress it up and play the part, but it ain't love if it can't break your heart." "Better Love" is a great gospel song that states wonderfully that "the greatest gift to give a man is to give him grace to live again." Clever wordplay like this, backed by traditional instrumental prowess, makes the songs on Chasing Down The Wind great companions for a humid summer night on the back porch.

It would be easy to dismiss songs with a banjo and a bit of a twang in the vocals as simple, but Green River Ordinance digs a bit deeper than first listen might indicate. The Country Music leanings on Chasing Down The Wind are worn well by Green River Ordinance, and over the course of seven songs, they make the most of the music that Texans love best. The electric guitars and alt-rock stylings will no doubt make a re-appearance on the next full-length album, but for a few songs on this EP, Green River Ordinance makes great, soulful, slower music.