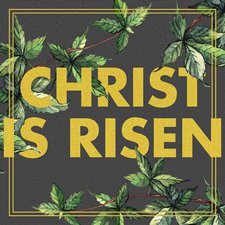 
Easter is the time of the year when we celebrate the resurrection of the Lord Jesus (you know, with eggs and chocolate and bunnies). And on this Sunday, many churches across America celebrate with special morning services that focus more on the resurrection than usual, in both song and sermon. And in BEC Recordings' latest compilation, Christ Is Risen, they're focusing on the song aspect, with twelve songs devoted to Jesus and His resurrection. In addition, it's doubling as a sampler to show some new talent they've recently acquired.

As you may or may not know, Mars Hill Music, a division of the Mars Hill Church family, signed a deal a few years ago to distribute their music through BEC Recordings. When head pastor Mark Driscoll stepped down, the base church, all of its branches, and its music division officially dissolved, which led to BEC acquiring all of Mars Hill Music's copyrights and artists. With some new and talented worship artists joining the roster, it makes sense for BEC to put this compilation together and showcase them, and a time of the year when people will be focusing on Jesus' resurrection makes it an even better time to release it.

Christ Is Risen has its pros and its cons. Starting with the pros, it's a wonderful collection of fresh worship songs that bear the markings of musicians who strive for excellence. With only six bands making up the twelve-song tracklist, you're still getting a mix of artists that break the monotony of worship compilations that are typically rather easy and safe. Even with the relatively radio friendly tracks from Ghost Ship and Citizens & Saints, it's still a more eclectic mix than most worship samplers. I also like the idea of using a track from the fairly-unknown Kenosis (featuring a singer named Hannah Garvey, with whom I am not familiar), as well as one from The Sing Team, who provides a song that sounds a little like Pacific Gold, but with, well, a team of singers. Dustin Kensrue's songs may steal the show here, though, with some excellent indie rock that sounds straight from The Modern Post. He also has one a capella track, "Down to the River," which is rather short, but a solid rendition of the old tune.

Again, Christ Is Risen does have its cons, like most samplers. To start, there only appears to be one new track here, and it's Kensrue's "Down to the River" (if it's not new, I don't know where it originally appeared). Of course, this sampler is to showcase the new talent that BEC has, so brand spankin' new material isn't necessarily mandatory, but it's helpful. And with BEC re-releasing some older Mars Hill material recently (such as Kings Kaleidoscope's Sin and The Sing Team's Oh! Great Is Our God!), it may have been better to use more older tracks like that. Granted, the songs from Kenosis and The Sing Team, from their respective EPs, will probably be new to most of BEC's fanbase, but beside these, "Down to the River," and Ghost Ship's "Christ Is Risen," the rest is a lot more recent, and already officially released under BEC. While Ghost Ship's other two selections are from a 2013 album, as are Kensrue's, "Defender" from Kings Kaleidoscope's Becoming Who We Are officially released in October, and Citizens & Saint's three offerings are all from their November album, Join the Triumph. The other issue here, and this may be more of a complaint than a flaw, is that the ex-Mars Hill bands all share their tracklist quite a bit, thus, you see a lot of the same songs between their albums. "Grace Alone," "Be Thou My Vision," "The Gospel," "Oh! Great Is Our God!," and others have been released several times across several different albums. The songs are great, but ultimately, I'd like to hear an album from this group of bands that has all new material on it.

Overall, Christ Is Risen is a terrific sampler for BEC and its fans. BEC's opportunity to say "Hey, check out our new bands!" was, for the most part, not wasted. Honestly, BEC's roster has seen quite an improvement with this acquisition, and at the rate these bands pump out new, high-quality music, this means more potential album-of-the-year contenders for Christians who like the music part of worship music to have a good deal of substance as well. If you've fallen behind on what's new with BEC, pick up this sampler and see if you like what you hear. While you're at it, you'll want to go ahead and preemptively pick up Dustin Kensrue's The Water and the Blood and Kings Kaleidoscope's Becoming Who We Are.