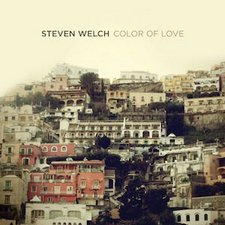 When not leading his home church in worship on Sunday mornings, Steven Welch found himself penning his own songs, but never had an appropriate outlet for them. With the help of a good friend of his, as well as a new partnership with Dream Records, Welch is finally able to do something more with his songs. His first full-length album is an indie pop collection called Color of Love.

Steven Welch's music is a surprisingly decent mixed bag of sounds; one minute he can be playing something inspired by the likes of Radiohead, the next minute it's closer to Coldplay, and the minute after that it's borderline MercyMe. Now depending on who you ask, those artists may or may not be considered too vastly different from one another (and Welch himself might not even consider them influences), but some of the songs are easily comparable to different sounds by said artists. Welch also has a tendency to write songs that are radio-ready without being too generic. "I Want To Love You" is a good example; the ballad has soothing vocals and an attractive melody that invites the listener to join in with the praising of our Lord. The opening songs, "Color of Love" and "You See Hope In Me," are strange in that they have that Radiohead sound at their cores, with guitars akin to Oasis and choruses that could've been written by one of the members of Hillsong. It's an interesting combination, but the end result is actually pretty solid.

Welch gets a little more abstract later in the album, like in the song "More," which features strings, piano, and drums that almost seem like they're played in an altogether different time signature. If you listened to only this song, you wouldn't get a good representation of the overall album, but it's still one of the stronger moments. It follows perfectly after a song called "House of Secrets," which shows Welch's ability to sing in a mostly lower key, with music that has a little more life. Welch doesn't stress his vocals too hard here; he could sing louder and stronger and it would still be a great fit for the song, but his lower key works just as well while still managing to be catchy.

Color of Love isn't seeing a lot of publicizing from Dream, but it's a pretty strong album. Steven Welch is a good musician and songwriter, and his ability to craft songs that would appeal to both AC radio fans as well as alternative fans is impressive. This is also an easy album to recommend for someone looking for both worship music and good music to enjoy. If any of that sounds of interest to you, Color of Love may be right up your alley.