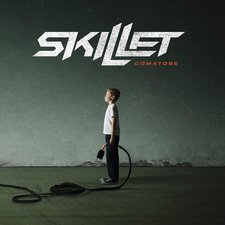 
It's been nearly three years since Skillet first released their last project, Collide. Now ready to unleash Comatose, their latest rock production, the band has returned with their seventh album, once again pushing their creative boundaries musically and lyrically. Skillet's never been known to be confined to the trappings of a single genre. Since their start, they've transitioned - even drastically at times. For Comatose to appear as a significant departure from Collide, it should pose as no surprise at all.

While Collide possessed more raw energy than had been heard from the band since their 1996 grunge rock self-titled debut, Comatose reinstates more of the synth elements from other recent recordings. Throw plenty of new tricks into the mix and the end result is what could easily be their most diverse project yet. Comatose opens with a burst of string-laced hard rock in the form of "Rebirthing" and "The Last Night," boasting more melody, lush synths, and keyboardist Korey Cooper's passionate vocals. From its start, it's clear the kind of record Comatose is thematically. "Rebirthing" is a sort of anthem for finding new life in Christ, while "The Last Night" directly addresses the desperation so many young people face that leads to addictive and self-destructive behavior (like cutting, for example). Positive and encouraging themes run amuck on this album, and it's music to the listener's ears.

Loneliness is a common topic on Comatose. "Yours To Hold," the album's first ballad, is written from the perspective of someone trying to encourage a hurting friend that they're not alone in their struggles. Similarly, "Whispers In The Dark," one of the album's first singles and among the album's highlight moments, is a driving rock track that offers such encouragement written from God's perspective to us. "Falling Inside The Black" is another hard-hitting anthemic rock track that utilizes sprinklings of Korey's vocals and synths coupled with John Cooper's anxious vocals for delicious results. Lyrically, "Falling Inside The Black" is a cry for help during a state of loneliness and depression.

Spiritual themes are present as well, however. "Better Than Drugs" is a hard-driven worshipful track that compares God's spiritual high to that of wine and drugs. A unique way of looking at how Christ's love can affect us, the song is a daring one lyrically. The record's title track actually continues this theme, recognizing that an "overdose" of God is the only way to wake up from our state of complacency and sin. While the songs on this album never address God by name, it's more than obvious who is being sung about. Even at its darkest moments, Christ is evident on Comatose.

Skillet proceeds to venture into more pop-driven rock territory for this installment, experimenting all along the way. The near pop-punk sentiment of "Those Nights" marks the biggest change in the band's sound. At first spin, the track may throw off a few fans who are used to the more aggressive stylings, but after repeated listens, the song begins to take on significance as an anthem for friends leaning on each other through rough patches in life. "The Older I Get" is more melodic and equally reflective, addressing the regret of unresolved hurt from a relationship long ago. "Say Goodbye" is a significant contrast; a beautiful piano-driven ballad about not wanting to let a friendship or relationship go. Ballads are nothing new for Skillet, but "Say Goodbye" is something altogether new for the band. With more of a grand presentation than may be expected from even this particular rock quartet, the song soars to heights one might find in a soft rock radio hit from a couple decades ago. Comatose draws to a close with the album's most unique offering, "Looking For Angels," a pop-laced hard rock track that features the verses spoken by vocalist John Cooper as opposed to sung. It's an all-new approach for the band, and Cooper pulls it off quite well.

Those who enjoyed the more raw rock stylings of their previous effort may be in for a surprise with Skillet's latest album, Comatose. Filled with big songs from beginning to end, Comatose relies on more theatrics to build their sound while delivering substance at the same time. A call to action for believers and a love letter to those going through difficult times, Comatose is a strong and adventurous addition to Skillet's already impressive catalog.

- Review date: 9/25/06, written by John DiBiase class="coversize" align=right>
It's been nearly three years since Skillet first released their last project, Collide. Now ready to unleash their latest rock production, Comatose, the band has returned with their seventh album, once again pushing their creative boundaries musically and lyrically. Comatose opens with a burst of string-laced hard rock in the form of "Rebirthing" and "The Last Night," incorporating more melody, lush synths, and keyboardist Korey Cooper's passionate vocals into the mix. Comatose proceeds to venture into more pop-driven rock territory for this installment, with the near pop-punk sentiment of "Those Nights" marking the biggest change in the band's sound. Tackling more serious themes that youth face everyday including cutting, loneliness, and troubles at home, Comatose is looking to be a strong and adventurous addition to the Skillet catalog... - PReview date: 8/15/06, written by John DiBiase-->