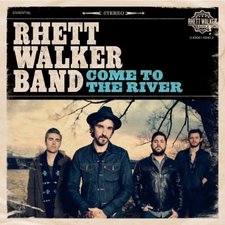 Rhett Walker Band is a group built on a second chance. Turning his life around after wild adolescent years, the self-described prodigal-son-come-home, Rhett Walker, now seeks to make an unashamed statement of his faith; Come to the River is the musical result with his newly-founded self-titled band, and it's a southern rock record of ambitious proportions, even if it doesn't make the largest intended splash.

When it comes to southern rock bands in the CCM circle, it's not difficult to deem Rhett Walker Band as unnecessary in the current climate. Both Third Day (with whom RWB shares their label) and NEEDTOBREATHE are both very much still in the mix even after a few combined decades of music-making under their belts, and while RWB would do well to complement the two with a unique take of their own on the genre, Come to the River seems to miss that opportunity. Instead, listeners largely get a slightly edgier version of the same simple radio melody they've already heard... with a southern twang for taste.

Aside from RWB's contemporaries that boast a better-realized sound, there are several elements to Come to the River's approach that do work and show promise for future excellence. While the title track gives a likable first impression as an edgy rock effort, it's the slower songs "All I Need," "Vessel," "Singing Stone," and "Brother" that achieve their desired effects best; the latter boasts an accomplished duet with David Leonard (one half of the duo All Sons & Daughters), proclaiming the universal need for grace ("Brother, don't you know no one is too hard to fall/no one is strong enough to make their own way"). This is RWB band at their best, and it's a foundation worth building on for album number two.

It's the other half of the album, however, that's too substandard to truly recommend. "Gonna Be Alright," "Make Me New," "Get Up Get Out," and "Can't Break Me" all attempt to nail that powerful guitar-driven song with a catchy riff or two, but there's no getting around that the listener has heard this before (and done better). "When Mercy Found Me" exists as the album's lead single, and though it's undoubtedly from a place of honest real-life soul-searching, everything about the track follows a long-standing formula: an unchallenging song structure, a softened-for-AC sound, and lyrics that come off as monotonously tired rather than simple and serene ("In one moment, everything changed/who I was got washed away when mercy found me/my Savior's arms are open wide"). In line with the southern rock standard, Walker's voice brandishes an unmistakably genuine drawl, and while a majority of the time it sets the mood of the song successfully, it can sometimes become so overpowering when it tries to carry the song's weight; showcasing a Chris Daughtry-esque passion and sense of urgency, it feels overexerted and less authentic than is probably intended, and the music behind the vocals should share the load in communicating thoughtful emotion more than it does.

Rhett Walker and his band have strategically positioned themselves to fill Third Day's shoes for the long haul if and when Mac Powell and company decide to hang it up for good, but it may be another album or two before RWB matches their predecessor-to-be's excellence. All the elements are in place for this transition, but it will only be when they join fresh and innovative songwriting with a more interestingly performed take on the genre that they will be able to hit the mark. For now, Come to the River is an entirely listenable effort by a competent band, but one can look to established southern rock outfits previously mentioned for a better quality listen.

Rhett Walker Band's debut album traffics in the kind of sincere, honest southern rock and roll that you know is made by four guys playing together in a room somewhere. The guitars sound live and bold and Walker's soulful bellow pops out of the speakers on the muscular opening track "Gonna Be Alright" like a cross between Greg Alman of The Alman Brothers and Soundgarden's Chris Cornel. The title track adds a banjo to the mix and adds a distinctly southern vibe to the songs refreshing take on Jesus' "water of life" metaphor. Lead single "When Mercy Found Me" is an excellent song of personal testimony set to some wailing guitars, and the poignant "Brother" tells the tale of a conversation with a minister who "acts like he knows every answer" and never has "a question or doubt in his mind." This sort of honest songwriting, combined with an excellent performance and a pinch of grit in the mix makes for an excellent debut album. There is certainly room for improvement in subject matter and lyrics (a few songs lean on clichés for answers), but overall Rhett Walker Band has a bright future. It's a good time for the southern brand of rock and roll in Christian Music. With Third Day and Needtobreathe releasing excellent albums recently and the center of the CCM world being in Nashville, it just makes sense that there would be a wave of southern music like Come To The River. - Tincan Caldwell, 7/13/12