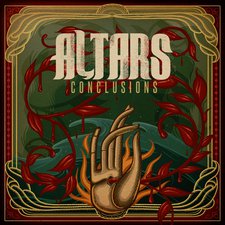 Facedown hardcore act Altars released their Opposition EP last July on Strike First to some decent fanfare. Now they've released their debut full-length project, Conclusions, nearly a year later. Many have labeled these Centennial State natives as "mosh metal" and, to be quite honest, it's a characterization that is not too far off the mark. At times they shine and at others the sound isn't much more than generic hardcore.

The album starts off with the two best tunes on the album. The intro, "Red Brick Army," kicks it off well. While there are limited vocals on the track, it introduces the potential Altars have. The riff, while ultra-repetitive, isn't necessarily what you will hear all too often in hardcore music and the lead guitar in the background really sets the song off. "Scum," the lead single, is next up. The song is one of the most aggressive tracks on the album and the musical transitions throughout it are well done. Perhaps the best part of the song comes lyrically when the words, "I am the scum of the earth and I am redeemed!" are screamed. The song truly captures what we as humans are as sinners saved by grace.

From there the rest of the album is hit and miss. The bass run in "Unknowing" is solid and the change of pace in "Shepherds" is welcomed, but other songs like "Lower" or "Montreal" are average at best. The biggest complaint on the album would be the instrumentals: "Portlen," "Ryland" and "Realization." They try to transition into these clean guitar tracks by simply fading out and in, but it doesn't play out well. The tracks are interesting ("Portlen" and "Realization" are electric and "Ryland" is acoustic), but they all sound very much alike. As a whole, they give the album a disjointed feel. In the instances of "Portlen" and Ryland," they kill the musical energy of the record. "Realization" features the best overall transition, especially into the final track. Personally, I love it when metal bands show their softer side, but how Altars went about it fell a little flat.

So, just what are the "conclusions" on Conclusions? It's not bad; if you are looking for a record to pop in and bang your head to, this is it. Overall, it's an enjoyable listen. Altars have far from redefined the genre, but they seem to capture the essence of it. They even manage to offer up a unique riff or two here and there. If you are looking for a bit more maturity or cohesion in your heavy music, For Today's latest, Immortal, may be a better place to look at this time.