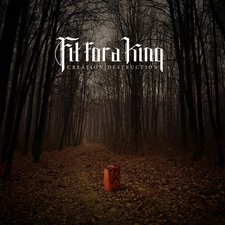 Fit For A King
Creation | Destruction

Texas metalcore outfit, and Solid State newcomer, Fit for a King, is releasing their label debut. Creation/Destruction finds the band in a good place as they attempt to make their way in a very cluttered and monotonous genre. While the sound is definitely metalcore, the group also offers a slightly harder sound (perhaps a slight death metal influence) than most metalcore acts in their music.

The album kicks off with "Warpath" (after the short intro "Creation"), featuring everything that is good about the album: solid musicianship, intense growls, ear piercing shrieks, and top-notch clean vocal sections. The clean vocals aren't just "good for a metal band", but good enough to be featured by a regular rock band as well. "Hollow King (Sound of the End)" is a nice follow up, but "Broken Frame" really shines. Although it's a song with plenty of screaming and growling, the singability of the chorus and clean vocal sections make it a tune that can be enjoyed by fans outside of the metal genres.

Speaking of songs for folks that aren't metal fans, "Skin & Bones" takes the cake and may actually be the best track on the record. The slow, haunting ballad features only clean vocals and no heavy instrumentation -- the sound is actually reminiscent of some slower piano/electronic Linkin Park material. The lyrics, "Is there life beyond the grave? Will I make the same mistakes day after day? There must be a better way. I know that one of these days I'll finally see You face to face at the golden gates. Will You take me, or will I fade into the grave," echo the sentiments of one calling out to God with uncertainty. It's not too often that the slowest track on a metal album is considered the best, but this just may be the exception to the rule.

Things transition nicely into "The Resistance" as the pace picks back up again. More lyrics stand out here as, "These words you will choose as you sit on your throne of lies; may they not be taken lightly. Your existence disgusts me," seem to be screamed directly at Satan. While "The Resistance" is definitely a winner, the top metal track may come in the closer, "Destruction." The finale is probably the nastiest (meant in a completely good way) track on the album and another example of the death metal influence as it is pretty much void of the metalcore sound completely.

Fit For a King enters the scene with one of the best metalcore albums I've heard in a while. These guys don't rely on the crutch of the genre --i.e. the breakdown-- as much as many others do. Yes, there are definitely breakdowns on the record, but they aren't in every track and the entire song doesn't revolve around the next breakdown, although occasionally the entire song is chunky enough to be a breakdown itself. Fit For a King is deserving of being thrust into the Christian metal spotlight. Creation/Destruction's release is coming off of solid debut albums from The Overseer and Wolves at the Gate last year. Perhaps Solid State is poised to reclaim their title as Christian metal kings.

Among several new artists to have signed with Solid State Records last year is Fit For A King. They made a name for themselves in central Texas over the last few years and are unleashing Creation|Destruction for their major label debut. Creation|Destruction is a very heavy album, with a great deal of death metal influence and a lot of murkiness in the overall tone. The production value gives it a little more life, though, and the death metal influence is just that: influence. It's more metalcore, with a lot of clean vocals, so it's a clean murkiness, if you will, but the guitars and bass definitely feel gritty and dirty. Some of the songs are breakdown-turned-full-song, such as "Hollow King (Sound of the End)," "The Resistance," "The Lioness," and "Destruction." Unfortunately, this causes for a great deal of monotony from beginning to end. Fit For A King has a lot of power and a technical musicianship, but song-to-song, it gets hard to pick out one from the bunch. The one song that is the most readily identifiable (and, oddly enough, this metal album's strongest track, in my eyes) is the indie rock song "Skin & Bones." It reminds me of one of Underoath's softer tracks, or something you might hear from Abel, featuring some keys, and mellow electric guitars, but no screaming, breakdowns, or double bass. If they did an album of indie rock, I'd probably buy it. So, how do we like our first taste of Fit For A King on a national level? For me, Creation|Destruction isn't a bad taste. It's a little generic, and they probably could have done a lot more as far as creativity to give each song more of a distinct flair, but I think they could pull that off with another album or two under their belts. I'd recommend Creation|Destruction to fans of Confide, I Am Alpha and Omega, and A Day To Remember (especially since Ryan Kirby's screams sound a lot like those of ADTR's Jeremy McKinnon). If you like your metalcore heavy, this is for you. - Scott Fryberger, 2/7/13