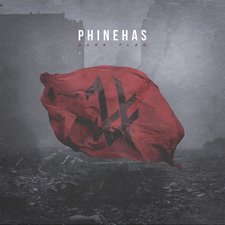 
Let me begin with a summary and directive of sorts: if you are a fan of metalcore, or any "heavy" Christian music for that matter, do not skip Phinehas's Dark Flag. The album is more than worth your attention and the artist should be on your radar.

Dark Flag is Phinehas's fourth full-length, continuing a trend of album releases every two years (Thegodmachine, 2011; The Last Word Is Yours to Speak, 2013; Till the End, 2015). For many, it doesn't take too many spins of older tracks, like "I Am the Lion" and "Fleshkiller," to recognize that this group from Los Angeles has got what it takes; the listed songs and others of the like are brimming with energy, invention, and craftmanship. In short, their current effort is no different. The first compliment I would give Dark Flag is that it is an adequate introduction to a standout band. In many ways, the album contains the best parts of their previous work: creative melodies, powerful vocals, and "breakdowns" that catch one's attention without pandering to genre expectations. A second positive attribute of Dark Flag is that the band is willing to experiment with atmosphere by inserting slower tracks and clean vocals between heavier moments (most notable in the progression of "Hell Below" to "A War That Never Ends" to "Break the Earth"). This technique adds contrast and effect to an album that could have felt much more mediocre and monotone otherwise, a tactic which reflects the band's experience and impressive discography. Finally, Dark Flag has some outstanding moments. The guest vocals from Jimmy Ryan (Haste the Day) on "Communion for Ravens," and the final transition into the feverish "Know Death; Know Forever," are two examples of selective greatness. So what, right? What good does it do to mention snippets of a 43-minute experience? Special moments on an album, while often not the same for every listener, are evidence that the band has introduced something new and exciting into the music community. Accordingly, Dark Flag is certainly worthy of some excitement.

In truth, I could stop here and feel that I have accurately represented the album. But, to do full justice, a final criticism should be included: the weakness of Dark Flag is that it is not a masterpiece. Harsh and unreasonable as this may be, it is the unavoidable consideration of a long-time listener. In this writer's opinion, this band is due for a classic! To be certain, the bar for such distinction is set incredibly high (call to mind Oh Sleeper's Children of Fire, The Chariot's One Wing, Underoath's Define the Great Line, etc). At the present, Phinehas continue to move laterally just below this threshold. Perhaps it is in the quieter moments of Dark Flag that this observation takes root. For instance, amongst the album's slower tracks, "The 38th Parallel" and "The Arduous March" stand in contrast to "A War That Never Ends" and "Meaningless Names" as less purposeful introductions of attempted ambience. While these minutes may add fuel to the fire of the tracks that follow and diversify the album to a degree, they carry little inherent value and instead broaden the divide between excellence and artistry.

With such apparent talent and craftmanship, both the devoted listener and present passerby should anxiously anticipate Phinehas's final step to the top. And while this may not be that moment, in the meantime, Dark Flag should be heralded as an enjoyable accomplishment and important milestone.