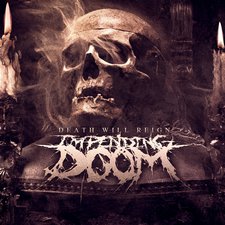 Take one listen to the furious opener "Ravenous Disease" or really, any track on Death Will Reign, the fifth album from Impending Doom, and it's almost impossible to tell that this is a fiercely Christ-centered band. Even the title of the album suggests otherwise. However, their ferocious brand of deathcore, described by themselves as "gorship," has found a rather large legion of followers since their conception in 2005, nicknamed the Doom Nation by the band, and rightly so; Impending Doom are one of the best bands doing this style of metal in the scene right now. The fact that they're a Christian band makes them somewhat of an anomaly.

Not since their Facedown Records debut, Nailed. Dead. Risen., has Impending Doom sounded this focused or ferocious. Maybe that has something to do with the return of guitarist Manny Contreras, who performed on Nailed. Dead. Risen. (as well as their sophomore effort, The Serpent Servant); the addition of guitarist Eric Correa, who once played in the little-known but crushing deathcore outfit Oblige; or the fact that vocalist Brook Reeves gives the vocal performance of his career thus far. Whatever it is, it makes Death Will Reign all the more compelling. The band has seamlessly meshed the brutality of their debut with the exceptional songwriting of their last album, Baptized In Filth, and made an album that exemplifies just how much they've grown in their eight-year career as a band.

One of the more obvious points of growth is the varied dynamics Impending Doom have introduced into their death metal assault. Perhaps it was hinted at on Baptized In Filth in "My Light Unseen," which showed off a softer, more melodic side of the band, but it is even more apparent here in tracks such as "Beyond The Grave," which retains an echoing, atmospheric quality throughout. This is but one example. However, there is improvement shown across the board on Death Will Reign. The grooves are deeper, the breakdowns heavier, and the ambience darker.

The lyrics are also somewhat more personal. You get the sense that Brook Reeves is attempting to purge the world of its demons through his guttural growls, all while conveying a convicting message of redemption through Christ. While most of the songs on Death Will Reign deal with these themes, Reeves devotes one song to his wife and son. "My Blood" is perhaps the highlight of Death Will Reign and might even be the best deathcore jam of the year, if not the past few years. The breakdowns are absolutely earth-shattering, and further prove that even the heaviest of music can be worshipful and full of love.