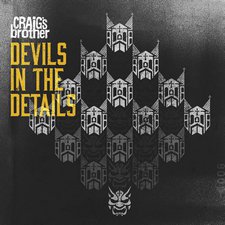 Craig's Brother
Devil's in the Details


One of Tooth & Nail Records most underrated, yet simultaneously well-loved alumni are the punk rockers that make up Craigs Brother. After 2004s E.P.IDEMIC, the band lay dormant until 2011, with an independent album called The Insidious Lie... then they went silent again. Now, eight years later, theyre back yet again, this time partnering with Indie Vision Music for Devils in the Details.

Craigs Brother wastes no time bringing the fast-paced punk rock. Follow Your Heart is a classic CB track, complete with Ted Bonds unique vocals, a catchy hook, and a driving rhythm. The lyrics are also a bit heartwarming; formerly known as Meilynns Song, the lyrics are an encouraging set of well-wishes for Bonds daughter: Oh may your relationships succeed, may you have all the friends you need, may you find passion in the paths that move you. Maintaining Destiny rocks a little harder and is a lot more in-your-face, both musically and lyrically. Its a politically-charged and satire-filled anthem that is very relevant to the American political climate.

Lifetime of Regret is the EPs center track. Its a solid rocker that vaguely reminds me of The Offspring in the chorus. The song is a bit more mellow than the one before it, which creates a very smooth transition into the least punk, least rock song of the bunch. Despite that, Harry vs Mount Saint Helens ends up being my personal favorite from this EP. With a little country flair in the music and a ridiculously catchy chorus, the song tells the story (from a first-person view) of a man named Harry Truman... no, not the former president. Half American hero, half stubborn old man, Truman refused to evacuate his home near Mount Saint Helens when it was threatening to erupt, which led to his unfortunate death in 1980. Its an interesting story you should read up on, and the song is a fitting tribute. The title track finishes the set with more of an upbeat sound that mixes pop punk with some harder rock. The bass guitar is a prominent feature in the verses, sounding great behind some of Bonds best vocal work this time around. Its a great way to end the EP.

Craigs Brother has never been a band for everyone, even amongst fans of pop punk. And its understandable, as theyre not the most accessible in the genre. But what they lack in accessibility, they more than make up for in talent, lyricism, and overall songwriting. Its great to have the band back together, and Im really hoping that Devils in the Details isnt the last we hear from them.