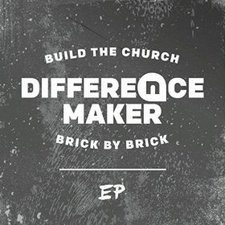 
NewSpring Church, a 19 site Christian community spread across South Carolina, has been independently releasing music as NewSpring Worship since 2010. Now signed with Dream Label group, NewSpring is hoping to spread their music to reach more people for God. Their four song debut, Difference Maker EP, is diverse in style and sung by four different worship leaders--which is an intriguing reflection of the varying personalities of the Church--but between a conventional approach to each style and a couple flaws it doesn't make a strong impression.

"Now And Forever" and "Every Line" are original songs you would expect to hear in a Church that plays contemporary worship music--singable lyrics, simple structure, and a lot of repetition. It is good for corporate worship, but it's too ordinary for a recording. These songs stand in stark contrast to "Love Me Like That" which has a pop / EDM vibe that sounds somewhat like Avicci's "Wake Me Up" both in the vocal and musical style (albeit not nearly as good). The lead vocalist, 19-year-old youth worship leader Bryson Purcells, is the most distinct aspect of "Love Me Like That" because of his unique deep voice. Purcells' voice is rough around the edges (especially when he tries to sing really low) but some vocal coaching would unleash a ton of potential. On the surface the lyrics are commonplace for a pop-worship song, but closer examination reveals solid songwriting with an appropriate balance of perfect and near rhymes. This highly produced song meets its polar opposite in the stripped-down version of the famous hymn "It Is Well." With nothing more than vocals and an acoustic guitar, the band attempts to foster an intimate setting for the rich songwriting. They largely succeed but it's more a credit to the power of the original lyrics than from doing anything new or creative with the song.

As a whole, Difference Maker EP is pretty decent, but feels unnecessary. Improving on their strengths--such as Purcells' unique vocals--and thinking outside the box will help NewSpring stand out among the vast array of worship collectives.