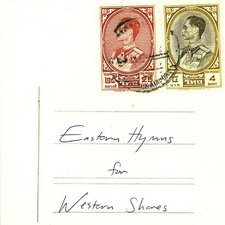 Nothing can be more of a blessing and yet such a curse as the notorious B-Side. These songs are the forgotten, set-aside tracks that were considered but never accepted. And while some artists/bands could easily release an album of songs that they never thought were good enough, others might recognize their hidden quality yet know they were made for something or somewhere else. With the latest Switchfoot release, we are given just that in Eastern Hymns For Western Shores. But let it be known that four out of six of these songs have already been heard; whether they were found on previous/random releases, fan sites, or somehow snagged off of infamous music pirating outles. However, this compilation is a pure representation of the darker and more mysterious side of Switchfoot. For any friend of the Foot, these "hymns" aren't complete unless they come together.

The album begins with the solid "We Are Bound." While it bears the classic Switchfoot sound, it has a very haunting chorus as Foreman sings, "We are bound, we are falling through" Though the song has a recognizable climax, it never feels like it really takes off. On the other hand, it feels as if the song is restrained on purpose making the theme of being "bound" more prevalent, thus serving as an effective track and strong opener. This is followed by "Stitches" which was a bonus for downloading Hello Hurricane on iTunes. This is definitely one of the darkest songs Switchfoot has put out to date. With a very breathy melody and leery guitar, the song carries a very "eastern hemisphere" feel. While it might not fill the listener with positive thoughts and a happy-go-lucky attitude, it's that middle of the night sad song that is a rare jewel.

Bringing the joy back into the mix is the previously released but still excellent, "Daylight to Break." While not overtly quoting the scripture, the song echoes a passage from Psalms, "Weeping may remain for a night but rejoicing comes in the morning." The lyrics are very real with a transparency about recognizing the evil in our own humanity but knowing we are meant to live in the light. "Overthrow" returns to that melodic minor key that has been standing out so heavily in this EP. This might be a controversial song to the American Christian. Foreman sings, "All our little words, love and peace and love, spoken with a sword. We say overthrow the government, put a new one up instead." And while at first listen it sounds very political, it really sounds like it's posing a question: Is the Church full of Christ followers or Americans? What stands higher in our life, the Son of God or our nation's flag? It's all about living for the Kingdom of God.

This controversy is followed by the classic "Dirty Second Hands." While most people may feel disappointed at this returning song (I'll admit I was at first), it has been tweaked just enough for the listener to notice the difference. Thankfully, the album concludes with an unreleased goodie, "Connect with the Spine." This is probably one of the strangest songs Switchfoot has ever released; with stacked vocals, insane instrumentation, and even a wildcat roar! For any LCD Soundsystem or Ratatat fans - this is a must have track.

This EP is not for the faint of heart. It might have songs that you absolutely dislike or undoubtedly love. But there is no question that this is a must have for fans - if not simply for the packaging! To accompany every song is a postcard with the CD coming in a sleeve thst resembles another postcard, with everything sealed up in a gift shop-styled paper bag. It's almost as if Switchfoot hand-packaged each of these bundles of joy. What this EP proves is that Switchfoot loves their fans to them there are no B-sides.