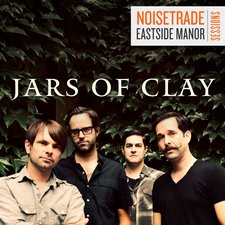 Ever since their masterful debut in 1995, Jars of Clay have refused to stick to a formula. Each of their impressive albums sounded completely different and yet somehow maintained a recognizable sound whether they were rocking out on If I Left the Zoo, contemplating relationships on The Long Fall Back to Earth or worshiping the Almighty in The Shelter. Very few bands are willing to take such risks which makes those that choose to do so all the more welcome. A month before the release of their latest effort and as a little treat to their devoted fans, Jars of Clay offered the Eastside Manor Sessions as a free download on the Noisetrade website.

This EP begins strongly with a stripped down and superior version of "Age of Immature Mistakes," one of Inland's best. With only a violin, guitar, and piano to back him up, Dan Haseltine's familiar vocals are given a real opportunity to shine in a thoughtful song about misunderstood love. Lyrics such as "Heartbreak is a killer on the loose it's after me/.../don't know enough about love so we make it up/like hearts in the hands of a child till they break them up," are poignant and insightful. This trend continues into the next highlight "Loneliness & Alcohol," which also outshines the main album's already impressive counterpart in every way. Featuring a rapidly-strummed guitar and faintly pounding drums, it's a catchy song that will have the listener tapping their feet as they contemplate the sadly introspective lyrics ("Tell me of the world you're leaving/while you're swinging like a wrecking ball/you bury all your love in secrets/and loneliness in alcohol"). The sad piano ballad "Fall Asleep" also does not disappoint. The minimal instrumentation only increases the power of an already strong offering from these seasoned musicians.

It's at this point where we hit the major snag of this EP. Since "Dead Man (Carry Me)" is still one of the best songs from the 2006 album Good Monsters, I had strong hopes for this new version. It instead comes off as awkward and hesitant from the beginning and never really recovers leading to a track that's worth skipping. The last song, "After the Fight," is the exact same track from Inland, which was welcomed when this EP was released but is a bit redundant now. Nevertheless, it's such a fantastic song that is always a pleasure to listen to.

A tasty appetizer to the main course of Inland, the Eastside Manor Sessions EP is a must-have treasure for even the most casual Jars of Clay fan. Not only do the three stripped-down versions surpass their main counterparts, but they give the listener a new appreciation for the raw talent of the 20-year-old band along with fueling the hope that these CCM veterans will continue to lead the way in the years to come.

It was a grand surprise when Jars of Clay announced the release of this "criminally" free EP on Noisetrade just weeks before Inland debuted. The quality of these exclusive live renditions is topnotch, far exceeding some similarly constructed EPs that bear a price tag. While the live take on "Dead Man" does feel a little out of place, and the album lead-off track "After the Fight" is a bit obsolete with Inland being available now, the acoustic takes of the new songs whet the appetite for more. If you haven't, download it for free at Noisetrade now! - 9/21/13, John DiBiase of Jesusfreakhideout.com