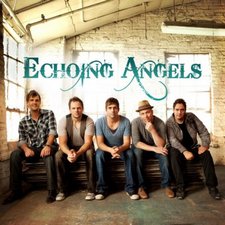 The 2007 release from pop band Echoing Angels, You Alone, was a typically average album that didn't garner much national recognition. But that was four years ago, and with a few new members and a new record label, the band is essentially starting again with a self-titled album, which drops this Tuesday.

Echoing Angels has been billed as a contemporary pop rock band with Southern influences. Initially, this seems pretty accurate. The album's first single, "Say What You Believe," has a certain Needtobreathe feel to it, and is both upbeat and catchy. Thanks to some solid production, a catchy guitar lick, and an ample amount of trumpets on top of everything, it turns out to be a great song to kick off the album. Unfortunately, things take a distinct turn sonically as the album progresses.

Surprisingly, this album quickly switches into a sound that is very dated. The second track, "All I'm Living For," could have been recorded ten years ago and it would have fit in perfectly. Part of this is because vocalist Trey Heffinger sings in a manner very similar to classic Christian artists like Ray Boltz or Phillips, Craig, and Dean. Additionally, much of the production hearkens back a decade or so, with some rather cheesy keys and guitar solos. Listening to Heffinger go falsetto over a background of shimmering violins in "Sad Sad Tears" will probably leave some listeners shaking their heads.

The album also jumps around a lot between pop rock and worship. For example, there's very little similarity musically between the jumpy pop sound of "Say What You Believe" and the straight-up worship of "Love So Beautiful." Meanwhile, "Leaving Here" has a decidedly Gospel sound. In general, the album is surprisingly mellow, which also contributes to the dated feel of the music.

Ignoring the out-of-date sound, this album is actually very solid. The music is generally pretty catchy, and instrumentally capable. These are songs that will definitely get stuck in your head, and they're enjoyable to an extent. Depending on your point of view, the back-and-forth between pop rock and worship could be considered admirable stylistic diversity. Unfortunately, there's no ignoring the dated musical style. While this album probably could have been excellent several years ago, it seems sadly out of place now.

When a band loses their label, manager, and booking agency, chances of making the big time look bleak at best. But that's exactly what happened to Echoing Angels following the release of their debut, You Alone, resulting in four years of very little to no activity as a band. Nevertheless, Echoing Angels has rebuilt their forces for their second go-round with their self-titled sophomore record. Echoing Angels feels more daring in its approach than You Alone, but it doesn't shy away from maintaining a simple and radio-friendly spirit; it's highly singable in nature, and with catchy guitar hooks and strategic uses of keyboards, it's apparent that Echoing Angels set out to make a purely fun and enjoyable album with spiritual convictions at the core. Their sound this time around is best described as a mash-up of the southern charm of Third Day (especially in the drawl of Trey Heffinger's vocals) and the soulful and experimental nature of Newworldson, but it's unfortunate that EA's material in general feels inferior to either of those bands' offerings. There are too many times where the verses have potentially profound things to say, but the following chorus underperforms with lines that feel basic, uninspired, and sometimes haplessly idealistic ("Love So Beautiful," "Way of Life," "All I'm Living For"). EA is at their best when they turn stories into thoughtful songs ("Sad Sad Tears," "California"), but they resort to trite lyrics too often when they're really going for encouragement instead. Lyricism aside, Echoing Angels is trying to grow musically but also simultaneously appeal to the radio crowd, resulting in a well-intentioned, but hardly monumental, release from the quintet. - Roger Gelwicks, 3/20/11