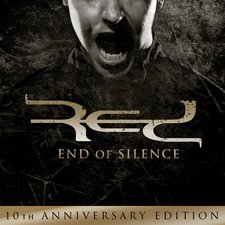 
It's hard to believe that it's already been 10 years since the Nashville-based hard rock band Red released their debut album, End of Silence. While most bands release a few independent albums or EPs prior to a label deal or mainstream success, Red simply appeared and began moving albums and selling out shows. Over the years, Red has continued to expand upon the hard, symphonic rock genre, but without significantly deviating from their original style. While it's not uncommon for bands to release 10th anniversary editions of their albums, such a move is usually ill-advised, and even in success, these endeavors are often met with a shrug at best.

As an album, End of Silence holds up surprisingly well. In fact, I would argue that you would be hard-pressed to find as good of a rock album released so far this year. The ballads such as "Pieces" are as emotional as ever and the rock anthems, such as "Breathe Into Me," just as energetic.

Now for the million-dollar question: is buying the remastered edition worth your hard-earned money? Well, from a technical standpoint of remastering, not a whole lot has changed. Overall, most of the adjustments revolve around altering the treble, either upping it or pulling it back on certain tracks. Frankly, it's hard to tell most of the time, but it really does shine through on occasion. In addition, though, and far more importantly, is how the volume levels have been "corrected" in regards to the string sections. The orchestral elements are much more balanced and are brought to the foreground this time, serving to create a better and more seamless flow. The difference is probably most apparent on "Hide," where a once mediocre song has become one of the best offerings on the album.

The album's bonus tracks are where this edition really shines through. The acoustic versions of "Already Over" and "Hide" are phenomenal, and the unreleased track "If I Break" is definitely one of the album's highlights. Finally, the seven-minute instrumental, which closes the album, showcases the band's talent with merging soft, flowing melodies and hard, gritty rock with grinding guitar work.

In terms of overall production, End of Silence: 10th Anniversary Edition sounds most similar to their most recent effort, Of Beauty and Rage. This makes sense, as the band has more experience under its belt (and more creative control). Ultimately, this album is worth the purchase, especially if you haven't already acquired End of Silence.

Ten years ago, Red burst onto the rock scene displaying a mesmerizing amount of passion and emotion--even if it followed current rock trends. End of Silence still holds up well today, and a tenth anniversary edition is well deserved. The original album has been remastered here, although it sounds the same as the original mix--especially to the untrained ear. The meat of this re-release, however, is in the generous 28 minutes of bonus material. Two of the four acoustic tracks ("Lost" and "Breathe Into Me") can be found on previous Red releases, and they both fit nicely here. The other two rare acoustic tracks are good tracks, but seem thrown together in the context of this album, because "Already Over (acoustic)" is the third version of the song on this album and "Hide (acoustic)"--though it has some excellent guitar work--has an unpolished mix that makes it feel out of place. "If I Break"--which is the most valuable track--is a solid cut along the same lines as their other radio-friendly hits. The seven-minute instrumental "Circles" closes the album on an epic note with crunchy guitars and beautiful orchestration. Thankfully, because of the amount of bonus material, this tenth anniversary release doesn't feel like a money grab, but if you don't yet own any version of End of Silence, the best version is the 2007 deluxe edition which includes a bonus DVD with a live concert. - Review date: 5/30/16, Christopher Smith

Ten years ago, Red released End of Silence, showing the world how passion for God and rock could be fused together. The album did well, thus prompting a tenth anniversary release. The tracks have been remastered, though it is difficult to tell much of a difference from the original record, but it is wonderful to hear the same highlights which first made listeners fall in love with the band, such as "Breathe Into Me" and "Already Over." The album truly shines with the bonus content, including four acoustic songs and two new ones. "If I Break" is a soft song about how God will be strong even when we are weak, and "Circles" is an instrumental song that fits nicely, fully utilizing a combination of strings, guitars and drums. As well done as the new content is, there is not a big draw to keep those who already own a copy of End of Silence from purchasing this edition, but it is perfect for those who are a fan of the band's later works without starting from the beginning. - 6/7/16, Sarah Berdon of Jesusfreakhideout.com