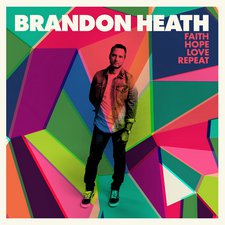 
Is there a CCM artist both as consistent and as inconsistent as Brandon Heath? He's consistent because he's released album after album of enjoyable, Jesus-centered, story-based songs, and he's done so almost exactly every other year for over a decade. He's inconsistent because with each new album, he's expanded the amount of genres and styles he's willing to try on for size. Not all of these experiments work, though, and with his sixth album, Faith Hope Love Repeat, he's finally ventured outside the realm of his strengths. In other words, he's made his first album that's merely inconsistent.

Kudos should go to Heath for releasing five dependably good albums in a row (seven if you include his Christmas album and the independently-released Soldier). Yet, there were warning signs on 2015's No Turning Back that Heath's first misstep was just around the corner: it was arguably his weakest to date, and more specifically, it was a baffling follow-up 2012's Blue Mountain, Heath's career highlight. Blue Mountain saw the seasoned storyteller stripping away genre veneers and sticking to a consistent folk-rock sound. The results were his most enduring album. Every sign pointed to the idea that he'd found himself as an artist and had entered the genre where he could be comfortably fruitful for the rest of his career. Instead, No Turning Back saw Heath returning to his pop-oriented, style-jumping habits.

This new album (FHLR for short) continues that trend while bucking Heath's trademarks -- namely, endearing storytelling over acoustic guitars and warm drum beats -- for songs that show off his weaknesses more than his strengths. FHLR tries to pretend that Heath is, first and foremost, a great singer, but that's never been true; his voice has an "everyman" charm that captures the emotions of the working class while being easy to sing along to. Here, he's stretched beyond his range, to the point of simply sounding bad ("Lighthouse" being the worst offender), while sometimes these songs commit an ever bigger crime: being boring.

Such issues are evident from the opening track, "The Future is Bright." Lacking dynamics, the song goes nowhere, with dull programmed drums on loop. These songs don't go as big or as hard as you'd expect, with third choruses having a "been-there-done-that" feel. The chorus hook in "Future" also sees Heath attempting a hip-hop swagger that he lacks the charisma and vocal flexibility to pull off convincingly -- a blunder that also hampers a "A Little Faith." After "Future" comes the best three songs on the album, beginning with lead single "Whole Heart." Heath goes full-on John Mayer (the chorus almost sounds plagiarized), but it's a pretty tune where Heath sounds comfortable in his skin. Then, "I Run" strolls in with the album's best lyrics, taking a Philippians 3-inspired look at perseverance: "I'll lean into the burning / Press into the strain / And I'll know it was worth it all / When I see your face / I'm in this race to run / Every step I take is worth the pain / Just to hear you say, 'Well done.'" Next up is "Got the Love," the wonderfully out of place disco/retro-R&B track featuring Tauren Wells. It's the most fun you'll have on FHLP, even though it's practically an outtake from Bruno Mars' 24K Magic. The difference between Mars' songs and this, though, is that even this danceable tune feels sterile.

Nothing here comes alive the way a great song should. This problem is epitomized by another three-song run, starting with the aforementioned "Lighthouse." After that, "You'll Find Love Again" displays how Heath really lacks the chops to be a pop singer, with ad lib callbacks in the last chorus that are more distracting than impressive. "Someone Like Me" is practically an Ed Sheeran song; like Sheeran's most frustrating compositions, "Someone" forces random melodies next to each other, stuffing potential hooks into a single track that never gel together, highlighted by some terrible transitions and an awkward near-rap in the second verse.

Fans of "the old Brandon" will find a shining light in the closing acoustic number, "Only One in the World," but even then, there's not much hope to be found. The song could've gone without the overbearing string arrangements, and Heath's voice sounds rugged, as if he was battling a cold during the recording sessions. Everywhere I look, I can find little to recommend about FHLR. The title track is a letter to a future daughter with odd lyrics and even weirder synths; "Don't Be Afraid" is pleasant but makes me want to hear "Heart" by Jars of Clay; and "A Little Faith" aims for the sweet spot between electronic sounds and huge, organic background vocals, without accomplishing the task as effectively as, for example, "The Sound of Your Voice" by Steven Curtis Chapman. In fact, a lot of what Heath is going for here, honest petitions for faith and a musical melding of acoustic sounds with modern synths, was done far better on Chapman's The Glorious Unfolding. If anything, I'd recommend you purchase that album and Heath's Blue Mountain, while we wait and hope that Heath makes an album as consistent as that again.

Blue Mountain was Brandon Heath's masterwork: a riveting, rural-themed project laced with poignant, true-to-life lyrics and a spare, perfectly-suited folk/pop instrumental backdrop that combined to make the album, far and away, his most distinctive work to that point. Since that time, Heath has, for the most part, returned to the radio-friendly pop upon which his early career was founded. And therein lies the better part of the problem with the new record. While the pop idiom can arguably be as powerful a platform as any from which to deliver one's ideas, and Heath can hardly be faulted for the decision to return to the aesthetic that made his first few releases so appealing to so many, cuts like "The Future Is Bright," "You'll Find Love Again" and the title track are indicative of the new album's slightly listless nature and overarching tendency to waft in and out of the listener's ear without leaving very much in the way of a lasting impression. And even when he branches out a bit, as he does on the funk-fueled Bruno Mars sound-alike, "Got the Love," the end result tends to be more imitative than original. Perhaps most tellingly, the most compelling moment during the proceedings comes with the closing number, "Only One in the World," which most closely mirrors the stripped-down, country-tinged textures that made Blue Mountain so unique. Veteran songwriter that he is, Heath delivers his latest set of compositions with polish and assurance. And "Whole Heart," it bears noting, is as impressive a pop song as any he's ever put to tape. By and large, though, his most recent outing, pleasant as it is, mostly winds up being a case of outward form rather than underlying substance. - Bert Gangl, 10/27/17

In Faith Hope Love Repeat, Brandon Heath trades his signature sound of acoustic guitars over a backbeat for a more commercial pop vibe, which the danceable grooves of songs like "Got the Love" demonstrate. Admittedly these tracks are fun, but they betray fans of his heartfelt and intimate songwriting. The good news: the title track and the acoustic closer, "The Only One in the World," show listeners that Heath's still willing to bear his soul. - 10/13/17, Andrea Hardee of Jesusfreakhideout.com

Known for his heartwarming and story-based songwriting approach, Brandon Heath is back with his 6th studio album. Taking a sonic detour, Faith Hope Love Repeat is a fun pop album, but unfortunately it does not play to his strengths as a songwriter (save for the beautiful closing track, "Only One In the World" that is a prime example of using a chorus to have three different meanings). The melodies here are infectious, but the delivery and lyrics are a bit more typical than what we usually get with this veteran artist. That said, it's still Brandon Heath and he'll be sure to get you smiling and singing along in no time. - 10/18/17, Christopher Smith of Jesusfreakhideout.com