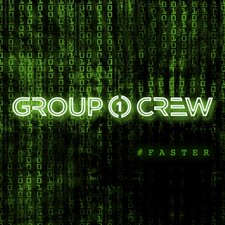 With the departure of Pablo in 2011 and Blanca in 2013, the trio that made up the identity of Group 1 Crew is now down to one. Though they technically brought on a new singer, Sarah Sandoz, Manwell Reyes is currently the only face of the band. His smooth raps and pleasing singing voice have the capacity to continue G1C's legacy, but sadly, on #Faster, there is too much of a focus on filling the void that Blanca left. This is most apparent in the quantity of guest vocalists, as there are four over these five tracks. All of these guest appearances are strong, but the influx of talent prevents Group 1 Crew from finding their new identity.

The fun R&B number "The Wonder Years" opens up the album, featuring up-and-coming pop artist Moriah Peters and Glory. Manwell does an excessive amount of Kirk Franklin style commentary in the intro, which feels a bit unnecessary. Additionally, his raps in the verses don't flow particularly well with the keys and horns, but otherwise, this is a decent opening song. "A Little Closer" is the first of three CCM tracks and contains the best lyrics on the album. Manwell opens up a bit as he sings about growing closer to God through hard times and good times. Unfortunately, the music is unimaginative as it sounds like many other K-LOVE/Air 1 songs. On an even more negative note, the "Oh woah oh's" scattered throughout the song are pretty annoying.

Jonathan Thulin brings his EDM/techno influence on "Heaven." The music is definitely more Thulin than G1C, but Manny owns the song enough to make this black sheep fit on the EP. The overall message of sharing Christ's love on "Heaven" is relevant, but the actual lyrics fall flat as they are too ambiguous and corny: "I can feel heaven falling down all around me" and "shimmy shimmy like the Holy Ghost up in your body." Fortunately, the music and vocals have the muscle to carry this song despite its somewhat lacking lyrics, making this an album highlight.

On "Everyday is a Miracle," a bouncy piano intro leads to a light electronic beat and strings, but like "A Little Closer," this song just feels too primed for radio play. One thing to note is that CCM veteran Rachel Lampa completely steals the show on this song with her dominating vocals. She leads the pre-chorus, chorus, and bridge and also sings with Manwell on the first verse. She sings exceptionally well, but since this is a Group 1 Crew song and not a Rachel Lampa song, mixing her to be less prominent during the verse would have been more appropriate. "Psalm 23" closes the 19-minute EP with a radio-friendly chorus and lightly rapped verses. Sarah Sandoz, the new member of Group 1 Crew, makes her first and only appearance here, and because of that, her presence feels like another collaboration. The song borrows lyrics from parts of Psalm 23, which is an overused passage in Christian music (G1C even referenced it on their previous song, "Forgive Me"). The scripture works well with Sarah singing it in the chorus, but when Manwell recites the first three verses in the bridge, it comes across as forced and awkward.

The hashtag in front of the album title is a good indication of the music--it doesn't set trends, it follows them. While all five songs are upbeat and uplifting, most of them are also safe and predictable. There are enough strengths to make this an enjoyable listen, but with so many other bands putting out a higher quality of the same type of music (including their own more recent release, #Stronger), it's easy to pass this one up.