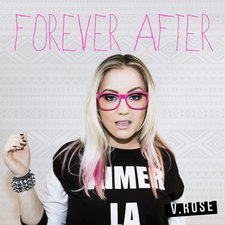 For those unfamiliar with V. Rose, 2011's self-titled album was pretty good and this will be a solid album to cop this summer if you're wanting to add to your pop and/or R&B collection. Forever After is her second installment with Clear Sight Music (Flame) and the lyrical focus throughout is waiting for that one day when there will be no more pain, sadness, or tears.

After an on-point intro, the upbeat pop (with some touches of hip hop scattered around) begins with "No Better U" where V's pretty vocals stand out in a song about being better even through the hard times life brings. Quickly up next is "Am I Trending," which drives home the message of worrying so much about what the world thinks of us. Flame, as expected, collabs with V. Rose and the two blend perfectly, but the stellar guest spots don't stop there. Later on we'll hear Shonlock, Da T.R.U.T.H., and KJ-52, and the combination of each's musical talent is stellar. Whether it's a song suited for the club, like "Forever Endeavor" or "Crown Thief," or where soft piano keys and smooth vocals are central, the bulk of the album has many multi-faceted flavors for many to enjoy.

One thing that the listener is going to notice is V. Rose's vocals. They are indeed beautiful, but there are a couple of spots where she trades in vocal quality for volume, detracting from her clear talent. Other than that, it's really hard to pick out anything negative. V. Rose is a rather unique pop vocalist and this album carries the weight to be played at house parties with the focus being entirely centered on Christ. I can see many people blasting this one all year long.