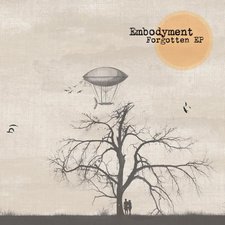 Embodyment is a band that has an interesting story. They began as the death metal band Supplication, before becoming the Kris McCaddon fronted metal band Embodyment. After an alternative metal transition with new singer Sean Corbray, and the album The Narrow Scope of Things, Embodyment became a pure alt-rock outfit that disbanded in 2004 while recording the follow-up to Songs For the Living.

With no word from the band in years, other than former members being in The Famine, the Forgotten EP released digitally and largely unnoticed in 2011. I, myself, wasn't aware of this album until a friend discovered it recently. The five-song EP contains songs that were to have been released on their fifth studio album. Though these songs may have been floating around the internet, this EP is the first time they were officially released.

Perhaps absence makes the heart grow fonder, but this is a stellar collection of songs. The entire EP carries a mid-to-late 90's alternative vibe with hints of bands like Foo Fighters and Stavesacre. Out of the five tracks, it's hard to say which track may be the best. Each track has something great to offer with guitar riffs, hooks, and melodies that will get stuck in your head for days. Lyrics like "I will, I will hold you. I will, I will love you. I'll be your answer; you be my design" from "The Answer", or "Your heart is numb for other reasons, but these repercussions are too ill, too ill. You left a pile of good intentions, but these repercussions are too ill, too ill," from "Hindsight," will also be running through your head.

This may be Embodyment's best work. Although the the music carries that 90's alt-rock feel, it doesn't sound dated. In fact, it actually has what a lot of today's music is missing. It's only speculation, but I believe this could have easily been Embodyment's best album if they were able to finish it. As it stands, these may be my five favorite Embodyment songs. One time through this 20-minute EP won't be enough to satisfy, and they will have you missing Embodyment all over again.