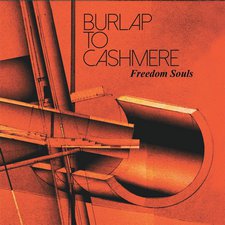 
Veteran artists crowd-funding their new albums continues to be a great story in the world of music. Signed to Steve Taylor's influential indie label Squint (home of such great artists as Sixpence None The Richer and Chevelle) back in the late 90's, Burlap wowed audiences the world over with their breakneck acoustic mix of folk (particularly the Greek, World Music kind) and rock and roll, and sold over a half-million albums on their first trip up to bat. Lead singer and main songwriter Steven Delopoulos's meditations on the darker sides of spiritual life, combined with worshipful moments, made for a potent stew that continues with Freedom Souls, the band's latest release.

Opening with a jaunty acoustic strum, "I Will Follow" (a song that is better than 20 other songs with that same title) serves as both a statement of intent and a testimony of coming back home, "I have followed my bones / I have followed this world / but in the long run it seems / it never cured my woes." Later in the song, against an urgent folk-rock backdrop, Delopoulos states, "I will follow you / because there is nothing left for me to do".

The following "The Great I Am" explodes with both acoustic fury and purpose. Serving as a mission statement for Delopoulos, who declares he's moving "forward to the great I Am" and that he's leaving behind "the great I was." The title track that follows seems to answer the question of what happens when you follow the great "I Am," and that is that you become a "freedom soul." Later in "16 Miles," Delopoulos sings that he's slowly "walking back from exile," and he gives the impression in the first half of Freedom Souls (and continues this thought on the prayerful "Passover") that he has done a considerable bit of soul searching in the past few years and captured it all on record.

For an album that begins with furious strumming, Freedom Souls goes out with a mellow acoustic vibe, giving a clue that the narrator has found a measure of peace in his life. "River In My Head" and "Dialing God" are peaceful meditations on life lived in the "sun." The final instrumental version of "Dialing God" sends Freedom Souls out with a lush instrumental coda that feels as ancient and Greek as the country itself, but channels a celebratory feeling of relief the lost wanderer feels upon coming home.

Freedom Souls is an excellent record, full of both bold, eclectic music (filling a particular need in a Christian Music scene filled with so many sound-alike artists) and a strong, story-like theme of wandering and redemption.