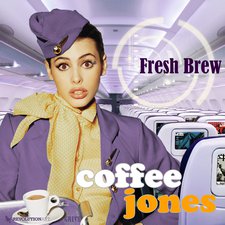 Stacey "Coffee" Jones is half of the Christian hip-hop trail blazers Grammatical Revolution In The Spirit (simply put and better known as G.R.I.T.S.). Two years after his group's last album has Coffee poised to release his debut solo project, and in preparation, he is giving us a three-track EP, entitled Fresh Brew EP. The EP is just a taste of what can be expected on the upcoming full-length.

The EP boasts the smooth sounding "Days Go Bye" with an Outkast feel which fits Coffee's "Andre 3000-like" style nicely. The song will have you bobbing your head to the old school sound in no time. This track alone should have you pretty excited over Coffee's solo potential. At the 4:49 minute mark, into the 7:23 track, the song shifts gears to more of a classic Motown feel and finishes as an instrumental. Coffee moves things from a "classic" sound to a club/dance vibe for "Dreams." The club sounds continue with the opener "This Time (We Run)" (which features Nathan Barlowe, formerly of Luna Halo), but is a touch more versatile in sound when compared to the previous song. There is a very stark contrast between the opener and the final two tracks though. If you are a fan of straightforward hip-hop, you'll love "Days Go Bye" and won't think much of the first two tracks. If you are a fan of more dance oriented music, like a Group 1 Crew, you may feel just the opposite.

The three-song EP gives little indication as to where Coffee will take his sound for his full-length album. The hip-hop fan in me would love an album full of stuff like "Days Go Bye," but with two of the three "sneak peak" tracks being club songs, that appears to be doubtful. Either way, fans should be happy to have Coffee still making music. Take a listen to this short EP and decide for yourself if you want to delve into the full album when it drops in 2013.

In the early 2000's, the hip hop duo Grits was one of the staples in Christian music. People were blasting "Ooh Aah" and "Hittin' Curves" on a regular basis and everyone was enjoying a serious rap team. Half of the stellar act, Coffee Jones, has a short solo sampling titled Fresh Brew EP being released this winter. The three-track EP's closer, "Days Go Bye," fills a full seven minutes with a slow vibe. While the production is unique, it seems to run on aimlessly for the second half of the song. "Dreams" carries creative beats that are best suited for the dance club, but the lyrical focus is not clear, so the track becomes nothing more than a nice dance party tune. The EP opener, "This Time," features the idea of running from life's problems hits home, while the thumping beats make for the most complete song on the EP. This release is not at all what I was hoping for, but I confess that I was half expecting some more Dichotomy-type material. That being said, I am excited to see what Coffee has in store for rap heads in the future. - Kevin Hoskins, 12/1/12