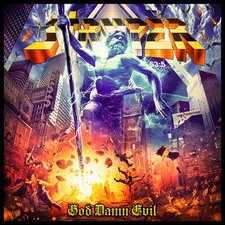 
Note: the title of this album isn't meant to be vulgar. In the context of the title track, the speaker is telling God to condemn evil, which He ultimately will do. Neither God's name nor the word "damn" is used flippantly.

Stryper, remembered as a pioneering Christian "hair" metal band of the 80s, returns with their first new studio album in three years, provocatively titled God Damn Evil. Though Michael Sweet and company generally stay true to their roots, Evil, like their previous two albums (Fallen and No More Hell To Pay), also tips its hat to modern metal. In the blistering opener, "Take It to the Cross," for example, Sweet shows off his retro vibrato vocals while the chorus pays homage to the guttural style of metalcore. The choruses are jarring compared to the standard hair metal verses, mostly because of the unexpected style shift, but after a few listens, it's easier to swallow. Overall it's a good song, though the bombastic choruses may be a little over the top to some.

As usual, the album opens with a stellar guitar solo as Micheal and lead guitarist Oz Fox take turns shredding. The lead single, "Sorry," tones things down slightly as Michael adds an emotive performance to a simple yet true message about how we use words carelessly. He sings in the first verse, "More than just complicated / and more than just okay. / No it's not overrated / every word you say." Here, Sweet references how people in the wrong often say that their words meant nothing, and the other person is just overreacting. He then acknowledges how words can, in fact, mean nothing with the chorus, "Sorry / it doesn't always make things starry."

For those getting reacquainted with Stryper after their comeback, it won't take long to realize that the self-referential lyrics of their heyday have been abandoned in favor of songs about relationships, God's faithfulness to us, and the reality of spiritual warfare. Meanwhile, the musicianship is as virtuosic as ever with Michael Sweet and Oz Fox frequently firing riffs back and forth, while Michael Sweet's solo album bassist, John O' Boyle (new bassist Perry Richardson didn't record for this album) and drummer Robert Sweet blaze away in the rhythm section. Michael's ridiculous vocal talents, particularly on "Lost," never fail to amaze, given that his voice sounds the same if not better than it did thirty years ago. Robert Sweet's throbbing bass drums underneath killer snare hits and tom fills give "The Devil Doesn't live Here" the right amount of triumphant metal fury, while the beautiful guitar runs in "Can't Live without your Love" emphasize the tenderness of the lyrics.

As impressive as the musicianship is, the songs themselves are also enjoyable. Standout tracks include "Sorry," "Lost," the Psalm 23-quoting "The Valley" and the furious closer, "The Devil Doesn't Live Here." The title track is also noteworthy with its anthemic, retro vibe and tongue-in-cheek wordplay, both of which bring "To Hell with the Devil" to mind. These songs are definitely the strongest and most memorable, but the weaker ones are good in their own right as well. This Stryper album may not give us something unexpected, but that doesn't stop it from being a very solid and entertaining record.

Michael Sweet and Stryper are no strangers to controversy.  The band has used colorful album titles in the past, -- most notably 1986’s To Hell With the Devil -- but their newest is the granddaddy of all controversial album titles from a Christian artist.  God Damn Evil isn’t meant to be profane, but as a plea for God to condemn and rid the world of all evil.  A provocative album title coupled with the rather public fallout with long-time bassist Tim Gaines makes Stryper’s 11th studio album (not counting 2011’s The Covering) all the more intriguing.  Another note of interest is the album cover.  Some may complain about the Zeus-like appearance of God in the depiction, but the more fascinating thing is what’s going on in the background.  A closer inspection will reveal the types of evil being destroyed and there seems to be a special emphasis on the “seven deadly sins;” it’s actually a really deep album cover when you really start paying attention.  Stryper has been riding a pretty good high since their return in 2005 and their last couple albums have ranked as some of the best in their long career.  While I wouldn’t put …Evil in the same category as an album like No More Hell to Pay, it’s still really solid.  Michael Sweet’s voice is timeless; you’d never guess that he’s 55 years old with over three decades of strain on his vocal chords.  It’s phenomenal!  For the most part, the music is what you’d expect from a Stryper album.  There is a strong dose of their 80s hair metal sound -- complete with tons of face-melting guitar solos -- with a nice blend of more modern metal elements, but a track like “Take it to the Cross” goes even a little further with the modern sounds.  Some of the album’s highlights are most certainly “Sorry,” You Don’t Even Know,” “The Valley,” “Own Up,” and “The Devil Doesn’t Live Here.”  While I enjoy Stryper’s music, the thing I respect them for most is their conviction.  Stryper has been the brunt of jokes because of their spirituality, but instead of dropping the Jesus message, Michael Sweet and company have just proclaimed it even louder.  I think that God has blessed this band with this nearly unbelievable longevity because of that very thing.  Stryper certainly doesn’t sound like some tired old band trying to hold on to the glory days; these guys are still making legitimately good music.

Despite the controversial title and questionable cover art, Stryper delivers another solid album with God Damn Evil. The production quality is crisper and most of the cheesier '80s trappings have been shed for a mature look at the world today. The message behind these songs are pointed and challenging, which is refreshing when most Christian artists play it safe with their lyrics. There are also upbeat tracks here, though, and they are just as strong. A couple of choruses come off a little corny, but on the whole, they are catchy and well-crafted. The band has touted this as one of their best, but I'll leave it to the fans to agree or disagree. What's clear is that Stryper is still producing quality music and shows no signs of slowing down. - 4/17/18 John Underdown