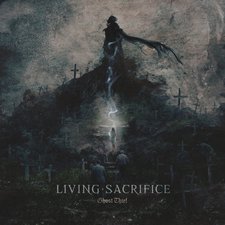 Living Sacrifice released their self-titled debut in 1991; the fact that they are still releasing new music twenty-two years later is a testament to a remarkable longevity that is rarely seen in the heavy metal industry. And the fact that this music is also excellent makes it all even better. Of course, there was a gap of eight years' time starting in 2002 when the band called it quits the first time, but when they returned to the scene in 2010 with The Infinite Order, it sounded as if they had never left. The three-years delay since then has been long, but the wait is finally over with Ghost Thief.

Considering the success of their last release, Living Sacrifice could have been forgiven if they had decided to simply write The Infinite Order: Part 2, but they chose to go a different route. This could be a good or bad thing depending on what the listener was hoping for. While The Infinite Order featured a lot of potential singles with very traditional verse-chorus-bridge songwriting structures, the songs on Ghost Thief are less structured and take longer to develop. For the most part, the rapid-paced firebrand tracks, like "Overkill Exposure" and "Rules of Engagement," have been replaced by more progressive, meandering pieces like the opening, "Screwtape." That is not to imply that the band has abandoned its traditional riff-based, heavily-percussive musical approach. It would hardly be a Living Sacrifice album without some driving percussion on top of Lance Garvin's always excellent drum work, and Ghost Thief is no exception. In fact, the band has brought in some outside help once again, with the additional percussion on the title track masterfully provided by T.D. Benton of White Collar Sideshow. This rhythmic approach once again provides a solid foundation to build on, with both the rhythm guitars and even Bruce Fitzhugh's vocals stacking up on each other to create a driving, pounding pace that is infectious both on the album and live in concert.

The more studious, patient approach to songwriting on Ghost Thief allows the best tracks on the album to unfold in a more satisfying manner than what is possible with shorter, more accessible songs. The title track is a good example, with a central riff that repeats multiple times, each with slight variations, ending with a final breakdown that itself takes time to develop into something pretty sick. Another great example is "The Mask," which contains several varying riffs, a nice breakdown, and caps everything off with an excellent guitar solo. And of course, it also has a heavy dose of trashy percussion added in to round out the signature Living Sacrifice sound. Other highlights include "Screwtape," "The Reaping" and "Your War," which is practically begging to be played live. Unfortunately, at other times, the longer track lengths don't accomplish their purpose and instead simply cause the song to drag. "American Made" is the primary offender in that regard.

Meanwhile, Ghost Thief is not without flaws. While the first few tracks initially draw the listener in, the music starts to blend together somewhat right around the halfway point. This is despite the fact that some of the best individual tracks are found later in the album. The issue is not that the songs are not individually excellent, it is that they start to sound too similar as the album goes on. Part of this is due to leaning too heavily on chugging breakdown sections, which repeatedly pop up and would preferably be replaced occasionally with a couple more Rocky Gray solos. Another issue is that Living Sacrifice has never been particularly good at slowing down. For example, when they attempt to take the pace down a notch (relatively speaking) in the primary chorus of "Straw Man," they instead end up muddying the rhythm of what is otherwise a solid track. This inability to slow down significantly combines with the more loose structure of the individual tracks to give the impression that the album is simply one long mix. This unfortunately gets tiresome as the album progresses.

I found myself with mixed feelings as I listened to Ghost Thief. The best tracks on the album provide all of the aggressive, driving metal any Living Sacrifice fan could want. And yet, the album as a whole just seems a little less inspired than previous albums. The individual components are all there, but the combination somehow lacks something. Ultimately, there are two conflicting ways to view Ghost Thief. On one hand, it can be seen as less accessible but more progressive than The Infinite Order, rewarding the listener with greater complexity after several patient listens. On the other hand, it could be seen as a more homogenous, less passionate album that doesn't quite capture the same fire the band had when they returned from their long hiatus. All reservations aside, I still find myself more inclined to side with the former view. Ghost Thief is not perfect, and it probably won't top Reborn on any "Best Of" lists for fans of this band. Nevertheless, it is an excellent album filled with many masterfully-performed tracks and only a couple of disappointments. It may not quite be as great as The Infinite Order, but it is still a worthy addition to Living Sacrifice's twenty-two year old discography.

Maintaining the momentum from their 2010 comeback opus, The Infinite Order, Spirit-filled metal legends Living Sacrifice have returned once more with Ghost Thief, a more-than-worthy successor to the ferocity captured three years ago. The Infinite Order picked up right where Conceived In Fire had left off, albeit with a much more mature and refined approach, and Ghost Thief is a natural progression from the new era ushered in by The Infinite Order. Noticeable almost immediately is a subtle return to the band's thrash metal roots, as well as an experimentation with dynamic and energy-building intros. The one-two punch of the first two tracks, "Screwtape" and "Ghost Thief," are worth the price of admission alone, with the former standing out in particular, thanks to a cameo from Demon Hunter's Ryan Clark. Speaking of Demon Hunter, it's nice to see Living Sacrifice drawing influence from contemporaries who they themselves have had a profound influence on, a characteristic evident throughout Ghost Thief. The rest of the album only builds on this energy, and offers a varied buffet of metal excellence. Frontman Bruce Fitzhugh explores various concepts pertaining to death and spirituality through insightful and challenging lyrics, and even delves into C.S. Lewis' beloved classic "The Screwtape Letters" on "Screwtape." Throw in crunchy, catchy and groovy riffage from Rocky Gray and a powerful rhythm section in the always-impressive Lance Garvin and Arthur Green, and Ghost Thief becomes yet another Christian metal classic from the godfathers of the genre itself. If you thought Living Sacrifice's reign had come to an end, think again. - Aaron Lambert, 11/10/13