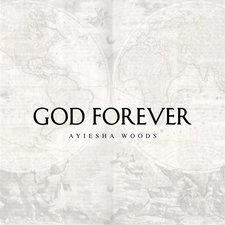 
Christian music veteran Ayiesha Woods is quickly approaching her twenty-year mark making music, which began with an independently released debut in 2004. While some of her career has stopped and started due to the priority of raising a family, she has admirably maintained a semi-regular and high-quality music release schedule. All of this was accompished after leaving Gotee Records in the late 2000's to go the independent route, which has its well-known pros and cons.

Woods returns here in 2022, nearly two years after her Full Circle EP dropped, with a single titled, "God Forever." Her newest song takes the worshipful pop direction and truly would fit snuggly beside the tracklisting of the songs on Full Circle. Bookended by the sounds of children playing in the background, theres a bouncy mid-tempo beat and a strong bed of synthesizers that carry the song. Her powerful and clear vocals communicate her desire for the Savior to, reach our babies, Jesus/may they know You/love You/serve You. Its clear that the future is on Ayieshas heart, and she convincingly praises Jesus for his worthiness, while pleading for Him to pursue the next generation. Its heartfelt and leaves this reviewer nodding his head in affirmation of the message and singing along after just a few listens.

Though it is unclear if this is a one-off single or a precursor to a fuller set of songs, one thing is sure, Ayiesha Woods is still at the top of her game with hopefully more to come soon.