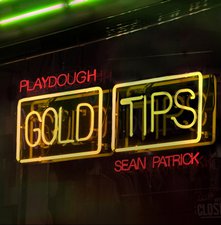 It's been a long time coming. For years, Playdough and Sean Patrick (AKA DJ Sean P) have worked together on the live show scene. The dynamic duo has rocked house parties, club shows, and festivals all over the country together, but have never done a collaborative album together. That all changed in late 2013, when the guys signed a record contract with independent label Man Bites Dog Records, and began work on a brand new studio album. On April 8, 2014, Playdough & Sean Patrick dropped Gold Tips on us all.

Now I should clarify: Playdough and Sean P did work together for the entirety of the Bible Bus mixtape in 2010, but Sean P's contribution wasn't in the field of production, but rather, it was cuts, scratches, and mixing. He's also produced various tracks for Playdough throughout his discography. But on Gold Tips, Sean P is the main producer, though there is some outside production on a couple of tracks. Freddie Bruno (who has also worked with Playdough for a long time, not only with production, but also as a fellow member of Deepspace 5, and as Playdough's other half in Phonetic Composition) is cited as the main producer for "Bumpy" and "Real Like It." He also helped produce "Bassy Loud Loud," and added some synth to "Gold Tips," and both synth and bass to "She Bad." Playdough himself also assisted in production for "Bust It," "Off the Wall," and "2 Liter," while adding guitar and bass to "Act Like You Know" and "Burn Rubber," respectively. This trio of guys are so familiar and well-versed with each other's styles, though, so it makes for a very cohesive listen as you travel through the album.

And what an album it is. While it most certainly won't be every modern hip hop fan's cup of tea, this is a high quality release from some true veterans in the genre. Gold Tips brings things back to the glory days of hip hop, while simultaneously touching on some of the modern era as well. The guys are all fond of old school hip hop, so it's no surprise that, when they team up, it's just what you're going to get. I can honestly say that I didn't grow up on hip hop, so I can't do an accurate job analyzing the classic stylings of this album, but it's easy to recognize the nods toward pioneers of the genre like Run DMC, the Beastie Boys, Biz Markie, and others. Some of the best beats on Gold Tips come in the tracks "Bust It," "On and On," "Real Like It," "She Bad," and "Turn It Out."

You might have an idea of what they mean by "gold tips," but for the rest of you, you need only listen to the opening track, "Gold Tips." It really has two meanings: the first is that it's a reference to gold-tipped audio jacks. Now, I'm no chemist, so I don't know the reasoning, but apparently gold-tipped audio jacks give the highest sound quality for your sound system. Playdough then runs with this and says "Now Gold Tips is a metaphor for my whole life." It's the idea of living the best and highest quality life you possibly can. It's a theme that naturally runs throughout the album, as heard in the infectious single "Turn It Out," "I'ma tell the whole world that my God is great, and I don't give two whats what dollar it make, as long as I was gold tips and my collar was straight." These lyrics also serve as a reminder of where Playdough's heart is: his idea of "living gold tips" is living life for God. God's forgiveness is also briefly mentioned in "On and On," when Playdough says "We wronged Him since Genesis, but then He said He don't remember this." A lot of people try to label the rapper when it comes to faith; some Christians say he doesn't talk about Jesus enough, and some non-Christians say he talks about Jesus too much, which he also addresses in "Real Like It": "Like I ain't churchy for you, too Jesus for all of them, but I ain't fishing for religion, I just is who I am."

In addition to the themes of living a full life and serving God, 'The Greatest Emcee in the World' kicks lots of fun rhymes with immense skill, as do the guest emcees that were brought along for the ride. I feel confident saying that the highlight of the guest verses comes from Promise in "She Bad." It's a track about a girl who's rather promiscuous and wants to get with the guys, who tell her "no" and explain to her why. Promise says "Is this what you want, lust from me, 'cause misery loves company, oh well girl I'm fine, and you fine and they telling you you a dime, but you worth much more girl, they lyin', you need Jesus." Gold Tips also features stellar verses from OHNO and fellow Man Bites Dog artist Copywrite, as well as an up-and-coming duo that's gaining some momentum in the underground scene called Social Club. They appear in a slower jam called "Off the Wall," and their verses are enough to prompt me to listen to their own albums (some of which, Rejects and Misfits, are free on NoiseTrade as of the date of this review). One of the Social Club rappers says "2014 is still gonna be our year," and if their top ten placement on the iTunes hip hop chart for their new album's release week is any indication, this just may be true. And to top it all off, we even get some occasional rhymes from Sean P himself, though he mainly sticks to DJ'ing. His intermittent interjections are well-placed and much-appreciated though.

The union of Playdough and Sean Patrick in a live setting is a thing of legend that I've yet to experience, but listening to the two artists together on a full-length album increases my appetite for it. Gold Tips is an excellent release. The overall genre won't appeal to everyone, even some fans of Playdough's back catalog, but it's certainly one of his strongest projects to date. It's more of a fun, let's-hang-out-and-go-thrift-shopping kind of album, so if you're searching for deep theology, I'd suggest the latest Beautiful Eulogy or Propaganda albums. But if you're up for a fun, party album that still features conscious rhymes and isn't riddled with profanity, you'd be hard-pressed to find something better than Gold Tips.