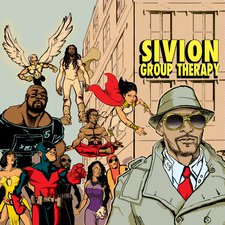 Though not known by many, Dallas hip-hop native and Deepspace5 member Sivion has been dropping tunes for many years and Group Therapy is his sixth full-length album. This release is being released by Illect Recordings, home to artists like Sintax The Terrific and Japhia Life, and fans of the underground rap sound will be in for a treat.

Group Therapy starts off with "Ladies and Gentleman," which is pretty much standard underground fare: some nice scratching turntables overlaid with solid lyrics that flow nicely. One of the better points of this release is some of the great guest spots, and the next two tracks deliver. Jurny Big and Manchild absolutely bring it alongside Sivion, while spitting tight verses over a nice backdrop of old school rap vibes and creating two stellar songs. Up next is "Watch Out" and "The Best," which fall into that standard category. They showcase nothing spectacular, but nothing particularly bad either, making them decent listens. The next few tracks could have been omitted from the album entirely and they would not have been missed; "Free Your Soul" has one of those never ending hooks, "Honey Dew" is overly simple, and "Let's Grow" comes across as messy and disjointed. The themes are positively focused, but the songs themselves just leave me hanging.

Whenever you pack in sixteen tracks, you are bound to take some chances that not everyone loves, but it comes down to a matter of taste. I don't love "One Two" or "Can't Stop Us" but I can't get enough of "We Got What You Want," "To The Rescue," and "Ask The Deejay." All three songs flow superbly and you can't help head-nodding along with the hot beats. Any fan of Braille or Mars Ill will surely enjoy Group Therapy and all hip-hop fans will enjoy spinning this one at least a few times. However, due to its small rap niche, it may not be on replay long for everyone.