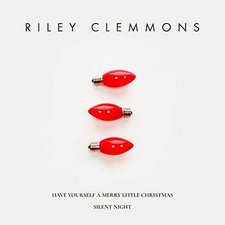 
When Riley Clemmons dropped her debut album in August of this year, the effect was both positive and immediate. Chock-full of shimmering pop, earthy and engaging funk and even the odd jazz-leaning torch number, the talented Nashville native's critically-hailed freshman project was a near-perfect example of how to put together a brilliantly eclectic record without sacrificing an iota of consistency.

Fans of the inaugural outing who resigned themselves to waiting another twelve months or longer for the next installment in her catalog should be overjoyed with the prospect of her newly-minted double Christmas single. Kicking off with "Have Yourself a Merry Little Christmas," Clemmons delivers a faithful rendition of the original song's melody atop slowly simmering rhythms and subdued instrumental accompaniment - the sum of which give a closer look at, and a deeper appreciation of, her undeniable ability to deliver soaring, crystal-clear vocals with seemingly minimal effort.

The same can certainly be said for "Silent Night," which, like the previous cut, puts Clemmons' amazing singing voice front and center, albeit with a slightly more fleshed-out musical backing. The quicker, arguably slight rushed, pacing of "Night" renders it the slightly less affecting of the two tracks, but it still stands as a fairly impressive entry into the ever-growing contemporary Christmas songbook.

Not quite as convincing a statement as her self-titled full-length offering, Clemmons' holiday dual single is nevertheless a very strong showing for the young artist, and should offer her most ardent followers something to tide themselves over until the awaited second album finally sees the light of day.