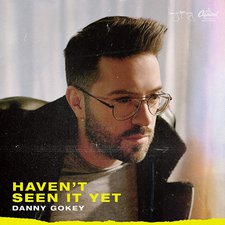 Danny Gokey
Haven't Seen It Yet


More than a decade removed from his time on American Idol, Danny Gokey drops his fourth full-length album, titled Haven't Seen It Yet. Since his third place on the popular singing competition in 2008, he has toured with the other Idols, tried his hand at country music, and now settled into a strong presence on Christian contemporary pop radio. His first release since 2017's Rise, Gokey returns to give listeners a full dose of pop songs, brimming with encouragement.

"New Day" is a buoyant and fun way to start the album, with its strong percussion and supporting horn section. It's infectious, and danceable joy should make it near impossible to remain seated upon hearing it. At the very least, it begs you to roll the car windows down, and crank the volume up. "Love God Love People" follows with similar catchiness, and an oft communicated sentiment, though that can be forgiven while you are bobbing your head to a terrific song. "Haven't Seen It Yet" is a quality tune, and has already impacted radio as the first single released from the album. It communicates the encouragement to press on in times of trial, "all his promises are just up ahead/maybe you just haven't seen it yet." A more EDM influenced take on the song finishes the track list, and I wish he had taken the gamble to release that one instead of this radio version. The remix version contains just a little more punch and texture that would have benefited the album overall. Four standard pop offerings follow, but the next song to stand out is the dynamically interesting "Undertow." It begins slow, but builds on a bed of swirling strings with Danny's raspy voice communicating a felt earnestness. Trap beats deep in the mix hold up "More Than I Could Be" as he sings of God's love making him "more than a warrior/more than a hero/more than anything/more than I could be." It may be nothing new lyrically, but it's a good reminder carried by a fun tune nonetheless.

Another highlight, the surprising "Craziest Thing," has a certain 80's/early 90's boy band feel to it. (Think New Kids On The Block or Backstreet Boys minus the layered harmonies.) It's a nostalgia-inducing homage to an era gone by that's sure to resurface again. Lastly, Mandisa joins Gokey to bring down the house with the rousing "Tell Somebody." A gospel choir drips with passion, imploring the church to "come on and tell somebody about Jesus/and all the great things He has done/where would I be/If He had not rescued me/come on and tell somebody." Danny and Mandisa take turns to great effect, calling the church to share the love they have found with the world on what would be a fantastic concert closer.

As far as drawbacks to the album, perhaps the greatest criticisms are familiar ones: some songs do little to stand out, and the album feels two or three songs too long. Again, this isn't because any of the songs are poorly done, or lack lyrical meat, they are simply retreads of familiar territory. I found the biggest examples of this to come from the trio of songs "Wanted," "Fighter," and "Better Because Of It." All in all, Haven't Seen It Yet treats listeners to joyful, accessible songs, with a deeply pastoral approach, all carried by his raspy, soulful voice. This is an album for fans of Danny Gokey, and those looking for strong pop songs, with "New Day," "Love God Love People," and the EDM version of "Haven't Seen It Yet" being the cream of the crop.