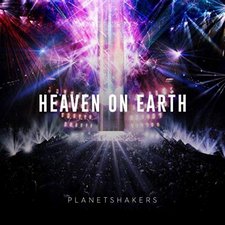 
Over the course of the last two years and four projects, the members of the Melbourne, Australia-based worship collective, Planetshakers, have been parsing out their music to their fans via a series of live EPs. While this is certainly a valid way to bring the tunes to the masses, particularly here in the post-CD era, the quartet of releases in question were plagued by inconsistency, serving up can't-miss and best-skipped cuts in roughly equal measure. Not so with the second installment of the Heaven on Earth effort. Like its forebear, the latest extended player offers up four tracks recorded in the live setting. However, unlike Part One, the new offering bolts nimbly out of the starting gate and runs its course from start to finish with nary a miscue along the way.

The bracing leadoff number, "Move Out of My Way," finds the band in absolute peak form, riding an irresistible funk-filled groove that takes the basic classic R&B building blocks favored by everyone from James Brown to Morris Day and outfits them with a thoroughly modern post-millennial sheen that few true music lovers will be able to resist. "Electric Atmosphere" steers the proceedings in a slightly more dance-pop-inclined direction without forfeiting an iota of the irresistibly celebratory ebullience set down by the first song.

Following a pair of bracing entries like these with a ballad might otherwise be a sure-fire recipe for letdown, but given the grandness of its melody and poignant sincerity with which its simple, yet profound, lyrics are delivered, the beautifully aching "I Want Jesus" virtually guarantees that those who have made it this far will remain no less than completely engaged. And the ten-plus minute "Draw Close Again," which sounds the most like what most listeners hear on Christian radio, interjects its admittedly familiar worship-oriented aesthetic with a rock-solid pop sensibility and attention to dynamics that elevates it far above the typical pop/worship fare found in the Inspirational Top 40.

The project isn't perfect. In one or two places on the first two cuts, the band crosses over from mere tribute to that which might be considered borderline impersonation. And "Draw Close Again" would likely have been even that much more convincing had the band opted to shave off two or three minutes from its running time. Be that as it may, even with its less-than-perfect moments factored into the equation, Heaven on Earth - Part Two is no less than a hands-down winner, despite its (minor) flaws, and, when all is said and done, may just be the strongest and most consistent entry in the group's sizeable 17-year back catalog.