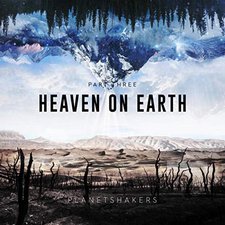 
Whatever else one might say about the Planetshakers, one thing is for certain: the Australian worship collective certainly does like the extended-player format as of late. Indeed, ever since the release of Momentum back in March of 2016, virtually all of the group's projects from that point on have come packaged in now-ubiquitous mini-album arrangement.

Following the first two EPs in the series, Heaven on Earth - Part Three starts off promisingly with the driving, melodic EDM title cut. The lilting staccato rhythms and feather-light feel of "Nothing Is Impossible" render it a likewise winning proposition. The remainder of the run time, however, is given over to stereotypical radio-ready tracks like "Rivers" and "Overcome It All," and the equally less than stellar "Through It All" remix, the latter of whose overuse of vocal effects winds up more gratuitous than engaging.

Not an out and out bad showing, by any stretch, Part Three is still the weakest link in the now-complete Heaven on Earth sequence. Of course, existing fans aren't likely to be swayed by the third EP's relative limitations. Newcomers to the Planetshakers arena, on the other hand, would be better served by downloading the entirety of Heaven on Earth - Part Two, along with "There Is No One like You" and "Above All Names" from Part One and "Nothing is Impossible" and the title song of the latest EP - the sum total of which go a long way toward making up a pretty solid full-length album in their own right.