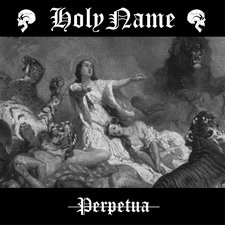 
Facedown Records has been rather quiet lately. The close of their 2010's heyday came with the recent departure of worship-centered metal acts Sleeping Giant and For Today. Since then, there's been slim-pickings of the Jesus-exalting-metal sort, even in the Christian metal field, and it's high time that changed. Self-describing themselves as "holy drone? violent worship," dormant members of these bands have united in HolyName with a chance to fill that space. Led by long-time Sleeping Giant frontman Tommy Green, this supergroup of sorts has released three songs so far as a teaser, bringing with it a sense of the familiar, and a few surprises.

The style presented here could be exemplified by Sleeping Giant's more worshipful tunes, like "Tithemi" or "Oh Praise Him." Green's intimate, free-spirited worship was one of the most unique things to come out of the Christian hardcore movement, and that spirit, once restrained by genre-demands, is given full reign here. Gone are the shouting vocals in favor of a mellow, somewhat ominous choir that's backdropped by low-and-slow "droning" guitars. This palate brings a cryptic atmosphere that's quite engaging and unexpected. The band's latest single, "Perpetua," seems to be based on the story of Perpetua and Felicity, two Christian martyrs who were executed by the Romans in the 3rd century. The message here is less worship proper, and more about following God even into persecution and death, "You will lead to the hollow/where my blood is spilled/You can lead/I will follow."

The eight-minute-plus second single, "Fall On Your Knees," is a slow developing, weighty worship number that lands somewhere between Black Sabbath and Misty Edwards. It's a simple song of adoration based on Psalm 23 and Revelation 5, "Fall down on your knees/Before the lamb/No other is worthy/All good comes from His mighty hand." The only downside here is the final bit when Impending Doom's Brooke Reeves blows open the doors without any warning, growling his way through an uninvited breakdown, like a zany party crasher. There's zero connection to the first eight minutes, and while I'm normally first-in-line to enjoy a crushing breakdown, this one detracted from what the rest of the song established. Much of the same could be said about "Meet Me Somewhere Quiet," where Green's intimate worship of Jesus is on full display with inspiring vulnerability, till the vocal-less breakdown ends it unnecessarily, without any ties to the rest of the song.

All said and done, HolyName's debut is a welcomed one. The sound, though simple and somewhat tame from a metal perspective, is inviting, and with a bit more cohesion and direction could make waves. While I'm not entirely sure what "violent worship" means (perhaps it's a play on Impending Doom's "goreship?"), they once again validate that heavy riffs with a worshipful heart can mix. I look forward to the full-length in hopes that they can connect all the dots.

Editor's note: Facedown Records sent us these three songs as a collection called "HolyName, singles", but each song is only available digitally right now as its own separate single.