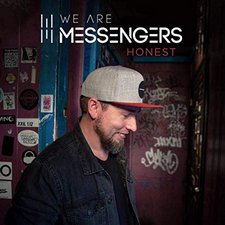 We Are Messengers
Honest EP


We Are Messengers has been steadily gaining popularity over the past few years since their self-titled debut album released in 2016, and for good reason. The band has a knack for crafting catchy pop anthems that see great success on Christian Radio. However, while the songs themselves have been enjoyable listens, musically they lacked innovation and did not bring anything all that new to the table. That being said, the band showed promise for the future, and now here they are in 2019 with their EP titled Honest.

Based on the title alone, we get an idea of what to expect lyrically. Frontman Darren Mulligan said that "Honest is the most truthful, raw and personal record we have made". This is made evident right off the bat, as the title track focuses on how it is important for us to be honest with who we are, and not try to hide our hurt from others. Musically, We Are Messengers fans will feel right at home in familiar territory for the band as "Honest" is filled with infectious hooks, backed by catchy and peppy electronic elements. Following this up is the slower "Abide," which almost acts as a response to the title track. This song speaks about abiding in God for comfort, and letting go of all fear in His presence: "All of my hurt erased / With you my heart is safe / All my fear is gone / With you I find my rest / God, I'm running home." This is followed by the anthemic radio hit "Maybe It's Ok," which perfectly meshes the first two tracks together from a lyrical standpoint. Darren passionately sings that "Maybe it's Ok, if I'm not Ok / 'Cause the One who holds the world is holding onto me."

Things take an unexpected turn with the rock-based "The Devil Is A Liar," a boot-stomping anthem for Christians to rise up and face the Devil without fear, because God has already set us free. Musically, this is something we haven't seen from the band before, and got this particular reviewer quite excited; I hope we see more of this from them in the future. The album switches gears again with the heartfelt, acoustic-driven love ballad "Wolves," before closing on the epic anthem "Gold And Glory." The latter track is based on Mark 8:36 and focuses on how it is important for us to find our worth in Christ instead of earthly things, and serves as a solid closer.

Like most pop records, this one isn't without its flaws. This album struggles a bit with its musical identity, relying too heavily on electronic elements at times. While each song serves its purpose on the album, some are weaker than others ("Abide", "Maybe It's Ok"). Thankfully, Darren's passionate vocal delivery and solid lyricism keep these tracks from sinking completely into mediocrity. Also, "The Devil Is A Liar" seems a bit out of place, as it is quite different than anything else on the EP. That being said, We Are Messengers delivers for the most part on this EP, and definitely shows potential to rise above the status quo. Is this the most innovative, groundbreaking pop we've heard? No, not really. But, it's solid pop that grows on you with each listen. For pop fans, this EP is a must listen; and if this isn't really your thing, I would still recommend giving it a spin - you may be pleasantly surprised.