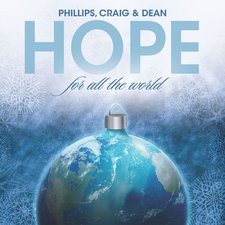 Phillips, Craig & Dean
Hope For All The World

Christmas albums in pop music (be it sacred or secular) are almost obligatory if you are around long enough. It's similar to a graduation ceremony; everyone has one or has gone to one at some point in life. And like graduation ceremonies, Christmas albums can be either a chore to sit through, or they can occasionally contain hidden surprises and be fairly entertaining.

For their second full-length Christmas album (which is about right for a 20 year music career), Phillips, Craig and Dean, that inspirational trio of singing pastors, add four Christmas songs to their independent Christmas EP of three years ago, and come up with a Christmas album that is full of familiar (if sometimes dry) moments, and some nice surprises mixed in as well. The canon of Christmas music is fairly well established by this point, and the best question to ask is whether the traditional songs here offer anything new in the listening and if the new holiday songs can stand alongside the carols.

As for Hope For All The World, the answer is that the carols represented here ("O Come All Ye Faithful," "God Rest Ye Merry Gentlemen / We Three Kings" and "The First Noel") fair pretty well in a hybrid rock/inspirational setting. The best surprise is the bouncy version of "God Rest Ye Merry Gentlemen / We Three Kings" that was made popular by The Barenaked Ladies and Sarah McLachlan a few years back. (It's the one you always here in the grocery store this time of year.) And if you are keeping score at home, this is most likely the only time you will ever see the bands Barenaked Ladies and Phillips, Craig and Dean ever mentioned in the same place again.

As for the originals, "Born Is The King (It's Christmas)" kicks off the album with a suitably joyous and celebratory groove and "A Night Of Hope" serves as the capable inspirational rocker in the group.

The only obvious clunker and pure head-scratching moment is the final song, "Jingle Bells (Duck Mix)," which clocks in at one minute and forty six seconds and features someone in the band singing "Jingle Bells" in a voice similar to Donald Duck's. It's an obvious joke, and the kind of song that should be a hidden track, and not a tenth song on an album that someone somewhere is charging fifteen dollars for. It's not that I don't appreciate humor; it's just a bit jarring when the rest of the album is so earnest and forthright. But for nine songs, Hope For All The World is a pretty good graduation ceremony. It conveys the spirit of the season well; it handles old material capably and offers a few new surprises.