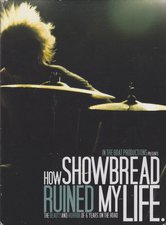 Showbread is just one of those bands that never quits, and seemingly is always up to something new. You can see that in the enormous undertaking of 2008's Anorexia Nervosa double-album concept, the two solo albums and two novels written by frontman Josh Dies, and the side production/engineering work done by guitarist Mike Jensen, just to name a few. If you've ever seen the band live, you know how crazy things can get on stage- and you may wonder, "Are they seriously like this all the time or are they just putting on a show?" How Showbread Ruined My Life gives you a resounding answer: they are very crazy.

The DVD has two discs, with enough material to last you a week. There's simply too much to try and watch the whole thing in one sitting. On disc one is the main feature, a 3-hour documentary basically containing random footage taken over the course of 2002-2008. It captures all the insanity, hilarity, fights, and blessings of spending half of your year on the road. It gets choppy at times, with a moment being captured and then cutting to a completely different and unrelated event minutes (or sometimes seconds) later. This is manageable but some may be adverse to this. The footage isn't professional- most of it was taken with a consumer-grade camcorder. Some might think that with such a raw (forgive the pun) style of filmmaking, there would be plenty of objectionable content. Thankfully, it's kept to a very small minimum- profanity is never anything worse than "dang" or "crap.".There are a few scenes with censored rear ends, but again, nothing done explicitly, just in humor.

Also on disc one is an entire concert set from Cornerstone Festival 2008. The video is, again, shot on less than professional equipment, giving you a gritty view of a Showbread concert that is not quite as enjoyable as a typical live DVD. The disc closes out with music videos that the band produced for "The Journey" and both versions of "The Pig," along with commentaries and "making of" featurettes. It seems that the band was unable to get the rights to have their videos for "Oh Emetophobia" and "Mouth Like a Magazine" on the DVD (which was produced solely by the band with no involvement from the record label), but we are treated to "making of" documentaries for both.

On disc two, you can find studio documentaries, footage from the "You Can't Save Yourself" tour, interviews, and a short film. The studio documentaries are quite fun to watch in my opinion. There are documentaries from nearly every Showbread album, and it is quite engaging to watch the albums being created from the ground up. The first two document EP's made before the band was signed, which is a real treat for the band's biggest fans. The documentary for No Sir, Nihilism Is Not Practical is easily the best of the bunch, showing the goofy and serious side of the band's first recording experience with Sylvia Massy and Rich Veltrop in Weed, California. The video for Age of Reptiles is regrettably short due to the fact that most of the footage was misplaced and to this day has not been found. Perhaps most intriguing is the feature for Anorexia Nervosa, an album which contains an element of sonic diversity that is at times breathtaking. There are a few times where the band's sometimes frustrating experience with producer Randy Torres (of Project 86 fame) are highlighted, but the entire documentary gives a good look at all the effort put into such an immense project.

The interviews are enjoyable and go in-depth into the history of the band and the production of their albums. Unfortunately, at the time of the DVD's release, Showbread's once large lineup had been cut down to a 4-piece, and only those members were interviewed, with former vocalist Ivory Mobley being a noteworthy exception. Overall, the How Showbread Ruined My Life DVD is very complete, very exhaustive, and quite a wild ride. Despite the fact that much of the live footage leaves something to be desired, the immense amount of behind-the-scenes content is more than enough to justify the $20 purchase.