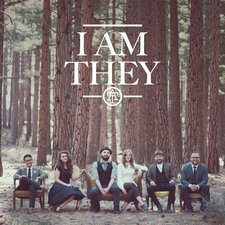 I Am They
I Am They

One of the greatest aspects of the digital age of music is access to an abundance of genres. Never before have music listeners been able to dabble in lots of types of music at once, and it's a fantastic opportunity for musicians to take creative cues from lots of influences. With so many more sounds in the popular consciousness, genres are then continually mixed together, and the worship music is no exception. Perhaps it was the explosion of bands like Mumford and Sons that made upbeat folk music ubiquitous in the soundscape, but many folk-influenced worship bands have sprung up in churches all over, and I Am They is the next band in this fold to make their move.

I Am They started off well as an indie worship band from Carson City, Nevada, and after listening to only a few tracks of their independently produced 2011 EP The Prelude, it reveals some key aspects to the sextet's musical experience. With three richly gifted lead singers (that legitimately sound great both solo and together) and an accomplished acoustic aspect to their sound, their only missing piece was polished songwriting, and a seasoned producer would be the key to the next level. Once I Am They was discovered and subsequently signed to Provident, their self-titled debut is the result of this professional boost. From the get-go, the band's first national single "From the Day" indicates a youthful, folksy band with lots of pop musicianship at full force. With great harmonies and even a prominent banjo, I Am They immediately reminds the listener of Rend Collective, which is not a bad comparison.

It's only when "From the Day" is held up with the rest of the album that the overall result feels less unique. "We Are Yours" and "Your Love Is Mine" feel like mere radio fodder; though the latter has an undeniable hook, its unimaginative chorus keeps the song too close to the ground ("love will rise, death will die, Your love is mine / stains washed white, You paid the price, Your love is mine"). There are lots of lyrics like these throughout I Am They: truthful, but not terribly creative. Much more regrettable, however, are "Over and Over Again" and "Even Me," which are simply filler tracks to get the tracklisting to ten songs. These are the marks of an album that's highly marketable, though not necessarily one that's interesting in the long run.

Granted, some cuts on I Am They are better than others. "King of Love" is great a modernized hymn (from "The King of Love My Shepherd Is") that's mildly reminiscent of Keith & Kristyn Getty's work. "Here's My Heart" and "Amen" are decent closers, as well; the former is a great acoustic ballad that effectively takes its time, and the latter is a grand finish (though the strings in the background get exhausting pretty quickly). These enjoyable moments keep the album afloat, but when other artists in the field offer more artistically complete folk sounds and meatier songwriting (like Keith & Kristyn Getty, Rend Collective, Preson Phillips, and Stuart Townend), there's less room for an inconsistent effort like I Am They.

One listen of I Am They's debut reveals a band that's fully functional but not hitting on all cylinders. The songwriting is good enough for a debut, but it's not at all surprising, and the album doesn't dig too deep overall. The good news is that they're a talented band that already possess the tools for creative success. With tightened up songwriting and less focus on the well-worn contemporary path, I Am They can create something all their own and truly memorable. For now, I Am They's debut uncovers plenty of holes that experience, and a matured approach, can surely help to fill.

As folk pop continues to grow in popularity (surpassing the "niche genre" stigma), more bands are coming up and capitalizing on it. I Am They is the next band to do so, and they're starting their musical career with their self-titled major label debut. I Am They has a lot going for it in the Christian radio world. Less folk than bands like Mumford & Sons or even The Vespers, I Am They really emphasizes the "pop," making it a lot more accessible to Christian music fans who don't truly care about how the music really sounds, and mainly want lyrics that glorify God. And I Am They delivers that. There are a few highlights, like "King of Love" and the cover of Crowder's "Here's My Heart," but overall, I Am They is probably not an album that I will revisit in the future. - 1/17/15, Scott Fryberger of Jesusfreakhideout.com

It's been five years now since Mumford & Sons reintroduced the banjo and other old-timey vibes to the pop world, and the ripples of their influence have not settled yet. From the Lumineers, to Crowder, to The Rend Collective, the sounds of acoustic stringed instruments and foot-stomping are back in a big way. New worship artist I Am They wants to fit in with this crowd, and on the band's debut album opener, "I Am Yours" and lead single, "From The Day," this sound feels authentic and vibrant. One could only wish that this young band could have maintained that feel for the rest of the album. Unfortunately, much of the rest of the band's self-titled debut sounds like over-polished country-pop, where the vocals are placed way too far out front and the instruments, even the interesting ones, are buried beneath a thick wall of production. However, many of these tunes will no doubt sound much better live, in the sort of raw, authentic presentation that I Am They seems capable of delivering. - 1/25/15, Alex "Tincan" Caldwell of Jesusfreakhideout.com